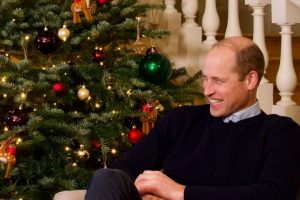 Prince William, was recently asked about his Christmas traditions by Barry Alston on the Royal Marsden London Hospital's radio station.

If the Will Ferrell festive comedy is at the top of your most watched Christmas film list, then you are watching a film fit for a Prince.

Being the president of the Royal Marsden Hospital since 2007, William told listeners that his favourite Christmas song was Feliz Navidad by Jose Feliciano and his favourite film was Elf.

For all the latest Royal news, including their style secrets, sign up to the OK! Daily Newsletter .

According to research by Pokerlistings.com, the 2003 family comedy is the most popular film to watch this Christmas period.

The research conducted by the online poker guide analysed IMDB, and Rotten Tomatoes scores and Google search levels, and Wikipedia page views to see which Christmas movie is the UK's number one fan favourite.

The film, which sees Buddy, a human raised amongst elves at the North Pole by accident, took the top spot, with more than 30,000 Google searches a month.

When asked about his favourite film, he said Elf because: "It's very funny and I keep watching it every Christmas, it still makes me laugh."

The film has an IMDB score of 7/10 and a 79% score from audiences on Rotten Tomatoes.

The animated musical The Nightmare Before Christmas came in second place, with Home Alone in third.

While being interviewed on the hospital radio show William also said: "Food is quite important to me at Christmas. I do tend to eat a lot at Christmas. There's always a tiny little bit of space left in my stomach somewhere for a bit more turkey or sausage or, you know, a bit of wine."

One young patient asked what William would do if he were in charge of Christmas for a day; he replied: "Bring everyone together to have a big party".

"There would definitely be no COVID, and there certainly wouldn't be any cancer in the world."

This heartwarming interview came as Her Majesty the Queen has reportedly 'cancelled' her annual pre-Christmas lunch for the Royal family as Omicron cases continue to grow in the UK.

For all the latest Royal news including their style secrets sign up to the OK! Daily Newsletter