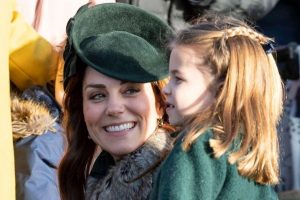 Photos published at the weekend showed the Duke and Duchess of Cambridge and their children at Heathrow as they prepared to jet away for a half-term break.

The couple’s children, Prince George, Princess Charlotte and Prince Louis, could be seen in pictures obtained by The Daily Mail, which showed them helping their parents with the luggage – how sweet!

Even sweeter, though, was a cute detail in Charlotte’s outfit, which even eagle-eyed royal watchers may have missed.

The Princess wore a blue rucksack as she headed inside the airport, and in the sunlight, the bag’s iridescent unicorn and rainbow pattern could just be seen.

The stylish item is a Monsoon design, but sadly as it is from a previous year’s collection, it’s no longer available on the site.

SEE: Royal teenagers! 14 best photos of princes and princesses in their younger years

We learned about Charlotte’s love of unicorns just over a week ago, when her father, Prince William, made a rare comment about his daughter during an Instagram Q&A about the Earthshot Prize awards, which were held last Sunday, and included appearances by the Duchess of Cambridge, Dame Emma Thompson, and other high-profile figures.

Although many of the questions concerned the environmental project, the Duke did have to deal with some more unusual enquiries, including one about the existence of unicorns.

Responding to the question, William chuckled and then referred to the young Princess as he revealed: “Well I think if you talked to my daughter, she’d say they were real.” The royal then teased: “Obviously, it’s a trade secret so I can’t possibly comment.”

When asked about whether giving out a prize would help solve the issue of climate change, the Prince said he believed the “hope” and the “optimism” that the prize would deliver could help.

He also expressed his concern for people from George’s generation, after the young royal took part in a litter collection project at school.