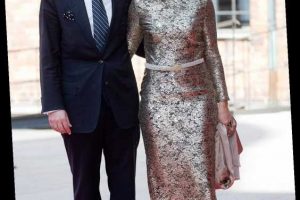 Princess Martha Louise of Norway is remembering ex-husband Ari Behn one year after his death.

The royal shared a sad post on her Instagram page on Christmas Day, one year after Behn died by suicide at age 47.

"Just wanted to wish you all a Merry Christmas," Martha Louise, 49, wrote along with a photo of an ornament hung on a Christmas tree. "This year has been a very different Holiday season because Ari, the beloved father of my three girls, is no longer among us."

"He chose to leave this plane last year on this day," the princess, who is now dating American "spiritual guide" to the stars Shaman Durek, continued. "We celebrated his life today, we cried over his loss and how much we miss him. It has been a day of loving whatever is."

The author was married to the princess for 15 years before divorcing in 2017. Together they shared three daughters: Maud Angelica, Leah Isadora and Emma Tallulah.

Behn's daughter Leah, 15, also shared a post on Instagram remembering her father and encouraging anyone feeling lonely or depressed to seek help.

"I wanted to say: One year ago today, my dad killed himself and it’s really been one of the hardest years of my life," she wrote. "But if you are alone and/or feeling lonely, I want you to know that you’re not alone! I know my words can maybe not do anything, but if it can help at least one person it’s so worth it. In these hard times, mental and physical health are so important!"

Leah wrote to those struggling to tell them things would get better — and she wants to help.

"And I can’t speak from your perspective, but I have been on the other side. And I can tell you that really hurts. I know that there is someone out there who cares for YOU and who you are," she said. "And please, if you need to talk, please reach out to someone. I know I would rather listen to your problems then attend your funeral." A funeral for Behn was held on Jan. 3 at Oslo Cathedral. In a particularly poignant touch, a painting from daughter Maud was laid on top of Behn’s coffin throughout the service, surrounded by numerous floral tributes from friends and family. Maud had intended to give the portrait to her father as a Christmas gift, but was tragically unable to do so. Behn — who worked as an author and wrote three novels, three short story collections and three plays, according to his website — previously accused Kevin Spacey of groping him at a concert for the Nobel Peace Prize in 2007. The writer spoke to radio station P4 about the incident in 2017, according to the BBC.

Spacey — who has largely disappeared from the public eye after more than a dozen men made sexual misconduct allegations against him, all of which he has denied — did not respond to Behn’s allegation at the time. A rep for Spacey did not immediately return PEOPLE’s request for comment in the wake of Behn’s death.

In July, it was revealed that Spacey’s sexual assault criminal case in Massachusetts had been dropped, PEOPLE confirmed. According to court documents, the former actor will not be prosecuted after he was accused of groping a young man at a Nantucket bar in 2016.

If you or someone you know is considering suicide, please contact the National Suicide Prevention Lifeline at 1-800-273-TALK (8255), text “STRENGTH” to the Crisis Text Line at 741-741 or go to suicidepreventionlifeline.org.

END_OF_DOCUMENT_TOKEN_TO_BE_REPLACED

END_OF_DOCUMENT_TOKEN_TO_BE_REPLACED
We and our partners use cookies on this site to improve our service, perform analytics, personalize advertising, measure advertising performance, and remember website preferences.Ok