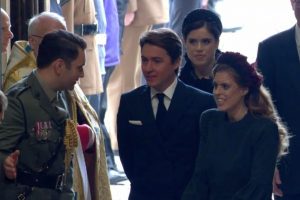 Princess Beatrice and Eugenie have been seen making their way into Westminster Abbey to show their support to the Queen for Prince Philip's memorial service.

Beatrice, 33, was seen wearing a black ensemble as she was accompanied by her husband Edoardo Mapelli Mozzi, 38, while her sister Eugenie, 32, donned a black floral dress as husband Jack Brooksbank, 35, stood close by.

The couples walked their way into the venue with small smiles across their faces as they geared up to pay their tributes to their grandfather, Philip, who died on 9 April in 2021.

Princess Eugenie opted to leave her baby boy August at home, while her sibling also chose to leave her daughter Sienna behind for the service as well.

The pair were not the only members of the Royal Family to make their way through Westminster Abbey today as Zara Tindall, 40, and her husband Mike, 43, alongside their daughter Mia, eight, also made an appearance.

Mia was one of many great-grandchildren to show their faces and pay tribute to Prince Philip and his 99 years on earth.

Prince George, eight, and his sister Princess Charlotte, six, also made their way with their parents Prince William, 39, and his wife Kate Middleton, 40.

The Queen was "actively involved" in every detail around her late husband Prince Philip's memorial service.

The Duke of Edinburgh's funeral was restricted amid the ongoing coronavirus pandemic as only 30 people were allowed to be in attendance in April 2021, where Her Majesty, 95, sat alone.

However, the memorial service today is set to be a complete contrast as the Queen is set to carry out Philip's final wishes around his funeral during the service of thanksgiving, which will include hymns, flowers from their wedding bouquet as well as guests that were unable to attend last year.

“The Queen has also been actively involved in the plans for today’s Service of Thanksgiving, with many elements reflecting Her Majesty’s wishes,” a spokesman said.

Paying tribute to her wedding to Prince Philip during the service, orchids from the bouquet she held on her special day will be included among the flowers.

Known as eryngium or "sea holly", the spiky blue flowers, will represent his naval career and lifelong love of the sea. Meanwhile, arrangements of the flowers will be in shades of red, white and blue, reflecting the Duke's devotion for England.

The congregation will hear of Prince Philip's “service as a Consort, liege man of life and limb, and of earthly worship to Her Majesty” and how he was devoted to his family, nation and Commonwealth.

The 1,800 congregation will also be encouraged to sing Guide me, O thou great Redeemer, which was originally meant to be part of his funeral on his request. Prior to his death, he had also asked for Te Deum in C by Benjamin Britten to be sung at his funeral.

The Dean of Westminster, The Very Reverend David Hoyle, will conduct the service and will describe the Duke "as a man of rare ability and distinction, rightly honoured and celebrated, he ever directed our attention away from himself".

The service is being streamed on BBC One from 10:30am.

For all your updates on the Queen, sign up to our daily OK! newsletter.