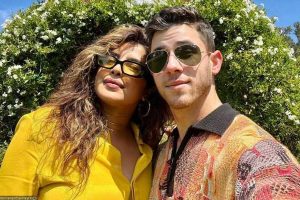 In addition to the moniker of ‘The Matrix Resurrections’ actress and the ‘Jealous’ crooner’s newborn daughter, the baby girl’s birth date is unveiled in her birth certificate.

AceShowbiz –Priyanka Chopra and Nick Jonas‘ baby daughter’s name has been revealed. Aside from the baby’s moniker, her birth date was unveiled three months after her premature birth via surrogate.

The couple’s little one has been identified as Malti Marie Chopra Jonas, according to a birth certificate obtained by TMZ on Wednesday, April 20. The document also stated that the newborn baby of “The Matrix Resurrections” actress and her husband was born on January 15 at around 8 P.M. in San Diego, California.

Though the real meaning behind baby Malti’s name has yet to be revealed, the moniker traditionally means a small fragrant flower or moonlight, per multiple baby name sites. It is often used within the Hindi language and Indian cultures.

Priyanka and Nick announced their first child’s arrival on January 21. At the time, the 39-year-old actress and the one-third of the Jonas Brothers released a joint statement via Instagram that read, “We are overjoyed to confirm that we have welcomed a baby via surrogate.”

“We respectfully ask for privacy during this special time as we focus on our family,” Priyanka and Nick continued. The “Baywatch” star and the “Jealous” crooner concluded, “Thank you so much,” adding a red heart emoji.

A source close to the couple at the time explained the reason behind the couple’s decision to take a surrogacy route. “Priyanka doesn’t have any fertility issues preventing her from having a baby, but she is 39 now so it’s not getting any easier,” the informant explained, “Their busy work schedules also mean that it’s difficult for them to physically be together to conceive when she is ovulating.”

“The baby had been due in April but the surrogate ended up giving birth on Sunday, so she was very premature,” the source added more details of Priyanka and Nick’s baby, who was born at 27 weeks. “Priyanka had been trying to get her filming all done before the baby was due in April but obviously this has completely thrown her plans.”

A month after announcing baby Malti’s arrival, Priyanka treated her fans and followers to the first glimpse of her daughter’s nursery. Taking to her Instagram account, the first-time mom shared a photo of what appeared to be a nursery room, in which the decor included multiple cute stuffed animals.