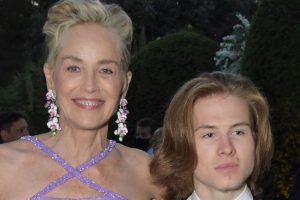 Hollywood actress Sharon Stone, 63, was pictured celebrating after she was named Commander of the Order of Arts and Letters at the Cannes Film Festival and she attended the prestigious event with her rarely-seen son, Roan, 21.

The star-studded amfAR gala saw The Basic Instinct star hit the red carpet with her son proudly on her arm.

Casino actress Sharon looked stunning in a floor-length lilac dress with crystals and feathers that had a satin belt around the middle showing off the star’s incredible figure.

The dress crossed around her neck and she wore long silver and lilac earrings to compliment the outfit. Her signature blonde hair was cut short and styled off her face. The star attended to host the exclusive amfAR gala event, which raises awareness and funds for HIV/AIDS.

Sharon had three outfit changes during the evening’s event as she changed out of her lilac dress and reappeared in a strappy black sequinned floor-length dress and ended the evening in a more casual outfit that saw her in a cuffed white shirt teamed with a maxi skirt and red heels.

Roan was adopted by the actress back in 2000 with her then-husband, Phil Bronstein, who is an American journalist.

The couple had experienced difficulty in conceiving and Sharon had gone through several devastating miscarriages before they adopted Roan.

The Hollywood star’s son is rarely pictured in recent years, although he was seen back in 2007 at the Golden Globes with his famous mum.

Sharon’s huge career came crashing down soon after she adopted Roan as she suffered a debilitating stroke in 2001 which saw her hospitalised and unable to work.

The actress’ marriage to Phil ended just two years later when he filed for divorce after five years of marriage. The couple entered into a bitter custody battle over their adopted son and it was Phil who was finally awarded primary custody of Roan.

In the years after the divorce, Sharon went on to adopt two more sons, Laird in 2005 and Quinn the following year.

The Oscar nominated actress’ eldest son Roan seems to be inspired by his mother’s career and has made his acting debut in the new romantic drama What About Love, due for release next year, where he stars alongside his mum and actors Andy Garcia and Iain Glen.