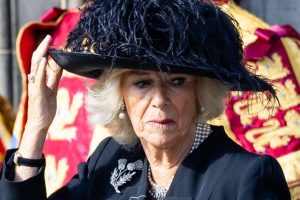 The Queen Consorthas been nursing a broken toe for over a week and battling through the pain to continue to support her husband on his duties, according to reports.

The injury is thought to have occurred before thedeath of Queen Elizabeth II last Thursday September 8.

With Charles now King of England, the former Duchess of Cornwall, 75, has found herself thrown into even more royal duties than before since Elizabeth II's death.

Camilla suffered the injury prior to the Queen’s death and has been in “quite a lot of pain” in the days since, according toThe Daily Telegraph.

For all of the latest updates, sign up for OK!'s Royal newsletter.

A source told the newspaper she has just been “getting on” with the job of supporting the King during an emotionally and physically gruelling week.

They added: “It is unfortunate timing to say the least but she’s been an absolute trouper.”

On WednesdayCamilla, along with other female royals, was driven to Westminster Hallfor the Queen’s lying in state ceremony.

However, it’s not thought that the injury is behind her not joining the procession led by the King.

An insider toldThe Sun: “Camilla has broken her toe and although it's healing it is very, very sore.

“It is terrible timing but she is soldiering on and not letting a broken toe get in the way of duty and doing what she needs to do for the King, the family and the country.”

Camilla and King Charles III have been performing royal duties in the last week following Her Majesty’s death and the new monarch will be “heavily reliant” on his wife in the next few weeks and beyond.

Reflecting on the tough week the pair have endured, former BBC Royal Correspondent Jennie Bond said that the new King will depend greatly on his "companion, friend and lover" Camilla, telling OK!: "It makes me think of Edward the eighth and how he said he could not be the King he would wish to be without the woman he loved by his side.

"Charles always includes Camilla in his speeches when he can.

"She’s a couple years older, she's getting older, and I think this must be very physically taxing for her. But I think he depends on her absolutely for support.

This 100 page tribute looks back at the life of our most beloved monarch, Queen Elizabeth II, marking key events during her remarkable 70-year reign, as well as her childhood as a young princess, her enduring love for Prince Philip and her family, and the lasting legacy she leaves our nation.

This edition is available to buy in stores now or it can be purchased online here.

Jennie added: "There are few people in King Charles's position. So few people, that he can share his innermost thoughts with."

"Camilla, as the Duke of Edinburgh was to the Queen, is Charles’ stalwart companion, friend and lover. I think he needs her support.

"I think he needs her more than she needs him, and he would be lost without her. So she's quietly there, isn't she, just trotting along like the kind and affable woman that she is."