The Tragedy of King Richard the Second (The Almeida Theatre, London)

Shakespeare’s Richard II has been shrunk so that it fits inside a grey, metallic prison cell and is completed – whoosh – in 100 minutes.

The Almeida Theatre’s take on the play starts with the speech Richard normally gives in Act 5, Scene 5, about how he has been ‘unkinged by Bolingbroke’. The whole tale is thus in flashback, this broken, wretched Richard reviewing his mistakes as though in a nightmare.

Simon Russell Beale, yes, is far too old for a Richard. And yet, as this fallen king bleakly ponders his errors, the casting makes sense. Few do quiet, eloquent despair as well as Mr Russell Beale. 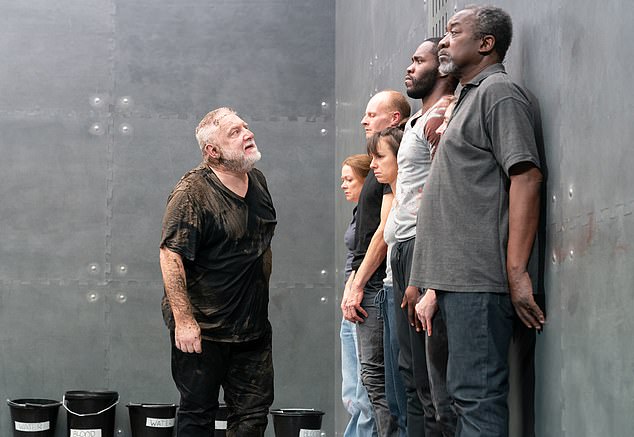 By this point the king has been drenched by pails of water and blood, and soiled, literally, by buckets of earth.

The floor of the riveted steel box, in which just eight actors in drab rehearsal clothes have performed the various roles, has been made sticky with destruction. Welcome to an England torn by political turmoil. Well, well.

So conceptualised is Joe Hill-Gibbons’ direction that it feels almost operatic, the text pared back to its best-known arias: John of Gaunt’s paean to ‘this England’, Richard urging his friends to sit upon the ground and tell sad stories of the death of kings, and the family melodramas of the Duke of York trying to turn in his son for treason. 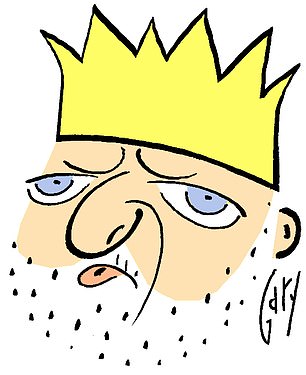 Quite a lot of the usual force of the play is lost. We do not have a sense of Richard as a cocksure youth (even John of Gaunt looks younger than Mr Russell Beale). Any pathos in Gaunt’s demise is blown aside by the onward narrative rush.

The slow roast of misfortune has become a microwave oven.

Yet elsewhere we gain: a clever sense of the gawping of political onlookers as courtiers tiptoe round the edge of the set, striking tableaux of eavesdropping gossip; the wall-battering pressure of events; the confusion around state affairs. It acquires the artistry almost of choreography.

Uncertain audience laughter last night spoilt moments – for instance when the king soliloquises on death – when a more traditionally-paced production would have prepared them for a contemplative moment.

Newcomers to Richard II may be confused. But those familiar with the play should be intrigued.