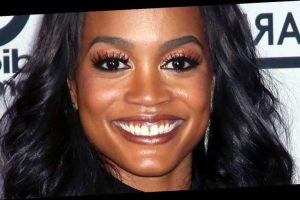 Former Bachelorette Rachel Lindsay was the one who interviewed Chris Harrison on Extra and asked him about the pics of Bachelor contestant Rachael Kirkconnell in costume at an antebellum, plantation-themed ‘Old South’ event in 2018. In the interview, Harrison defended Kirkconnell, and while he had been a stalwart figure of the Bachelor for nearly 20 years, he’s bowing out as host — at least temporarily — for the backlash his comments have received (via E!). And it sounds like Lindsay is still processing the whole event.

On Extra, she talked about how she felt after the interview was over and why she pushed the topic. “I wasn’t shocked at the content of what he was saying… in public, where other people can hear what you think, and your, your thoughts may be a bit controversial, but I remember also thinking, ‘This is something that needs to be heard. This is something that needs to be seen.’ And I felt a duty.”

Rachel Lindsay is working to fight against implicit racism

Rachel Lindsay saw the conversation as one of vital importance to the general public and Chris Harrison: “Because when you think of racism, you think explicit racism… you think wearing a white hood, you know? Saying things that are derogatory or offensive. That’s explicit racism, but then there’s implicit racism where you have these unconscious biases and stereotypes and misconceptions of certain groups, and that’s what we were seeing in that interview, and I think it was a moment for people to recognize what was being said and to learn and grow from it.”

As far as what should happen next with Harrison, Lindsay told E!, “I think he has admitted the way the interview went, to use his own words, ‘perpetuated racism,’ so I think that he is aware of some of the things that went wrong in that interview and is willing to grow for it.”

Although, it seems like Harrison’s awareness should have shifted sooner. On the podcast “Higher Learning,” Lindsay explained that The Bachelor had hired a diversity consultant recently (via The Ringer). Knowing this, she asked, “Who didn’t attend the class? Did Chris Harrison not sit through that? I’m confused as to how you could have a whole consultant — consultants — working for you, yet what happens just happened.”