Rachel Riley, 33, didn’t hold back when responding to a critical fan on Twitter, who challenged one of her tweets yesterday. The issue took place after the Countdown star got into an exchange with another follower following her public display of support for Manchester United’s decision to prevent their adverts from appearing on fake news websites. The original tweet from Rachel’s fan read: “@RachelRileyRR WTAF is your motivation. You seem so intelligent yet your actions are way beyond paranoia. Who is pulling your strings. Genuinely fascinated to know.”(sic.) The presenter then took the opportunity to clarify why she approves of the football club’s initiative, in view of her 365,000 followers, simply replying: “Combatting racism”.

In spite of Rachel’s defiant explanation, another critic surfaced to challenge her with an ironically misspelt response: “Combating racism? Love, you can’t even spell it.”

Luckily, the TV personality was quick to issue a witty retort to hit back at the troll’s suggestion, pointing out their spelling error in the process.

She wrote: “Spelling’s fine, thanks love. You can find ‘combatting’ in the dictionary under C, just like ‘c**kwomble’.”

Rachel’s fans took to the comments section of her tweet to revel in the Countdown favourite’s funny comeback.

One wrote: “Trying to ‘school’ someone who works on ‘Countdown’ on a spelling mistake isn’t likely to end that well, is it?”

Another supporter added: “I heard the mike drop on that one.” 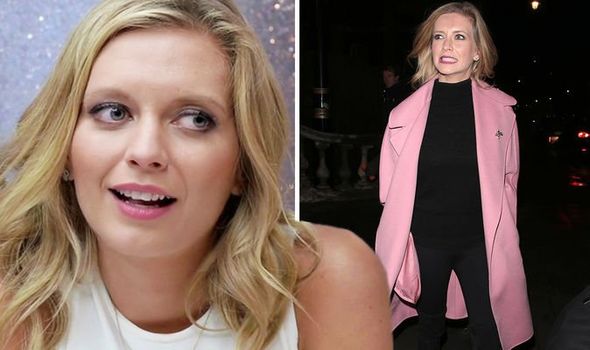 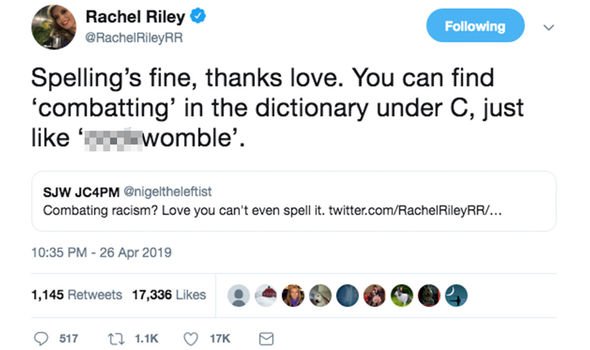 A third replied: “Ah the beautiful irony of someone making a comment about spelling whilst misspelling something themselves. That’ll never stop being funny. At least these bigots are amusing at times.”

Elsewhere, Rachel was forced to speak out yet again on the social media platform this week after a shocking petition was created to “silence” her.

The protest was started by a group of Jeremy Corbyn supporters who took issue with the mathematics expert’s claims about antisemitism in the Labour Party.

The drama took place when Rachel shared a petition about the 69-year-old MP’s alleged anti-Jewish views. 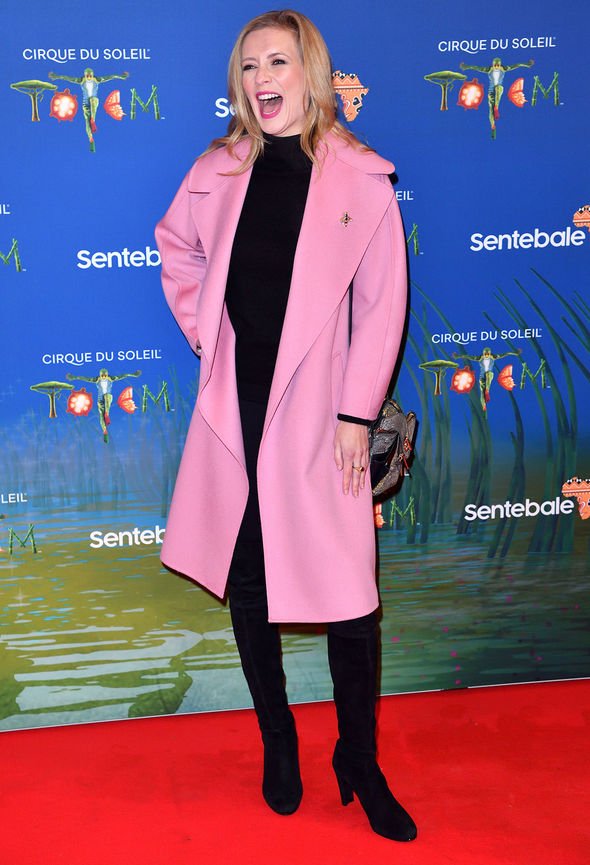 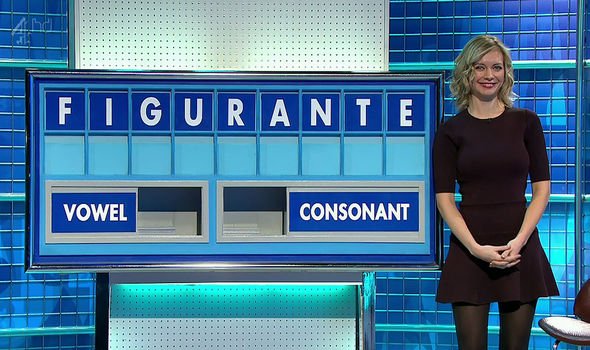 In a follow-up tweet, the star gave fans an update on the situation, adding:  “My support of this petition was ‘the final straw’ for the Corbyn protection society so they’ve started a petition for OfCom to silence me.

“So here’s another RT of it, do please sign and share. I don’t think they’ve got the message yet. Supporting evidence in pinned tweets.”

Along with screenshots of comments made by Jeremy Corbyn supporters, she wrote: “Aiming to have me silenced for standing up to it. @Change facilitating it. Shameful.”

The petition on Change.org is titled: “Rachel Riley – Stop Smearing the UK” and it has currently received 1,714 signatures.

Jeremy Corbyn has strongly denied allegations of anti-Semitism during the controversy that has ripped through his party.

Rachel recently spoke about the Labour MP’s claims that he is not anti-semitic in the May issue of British GQ, telling the publication: “Whether he says he’s an anti-Semite or not, he’s allowing this to happen.”

END_OF_DOCUMENT_TOKEN_TO_BE_REPLACED

END_OF_DOCUMENT_TOKEN_TO_BE_REPLACED
We and our partners use cookies on this site to improve our service, perform analytics, personalize advertising, measure advertising performance, and remember website preferences.Ok