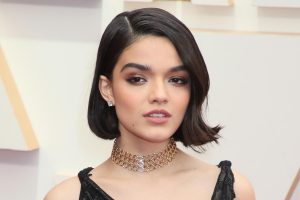 Rachel Zegler is opening up about what’s next for her after completing filming on The Hunger Games: The Ballad of Songbirds and Snakes.

The 21-year-old actress shared over the weekend that she wrapped filming on the Hunger Games prequel film, after being on set for the past few months.

After her announcement, many fans were wondering (and asked) what she will be doing next and when we can expect her next movie announcement.

Find out what she said inside…

One fan quickly wrote, “since filming has wrapped, is this when you announce your next movie/project bestie @rachelzegler,” to which she replied, “can i rest PLEASE”

Rachel then tweeted, “Bye” in German, followed by, “thank you for loving me on my journey i love you all back. throwing my cellular device in the water now. can you reach me? no. u can’t. haha”

The actress, who has filmed the live action Snow White and The Hunger Games back-to-back, as well as recording for the animated movie musical Spellbound, all this year, said she is looking forward to some much needed rest!

“i have travelled to 5 countries this year and made 2 live action films whilst in the midst of recording 1 animated one all while campaigning for awards for west side story and NOW???? I REST,” she tweeted.

Rachel then responded to a fan and said she will “emerge from my hibernation” when it’s time to start promo for Shazam!: The Fury of the Gods, which comes out in 2023.

In case you missed it, watch Rachel give a little set tour of The Hunger Games: The Ballad of Songbirds and Snakes, which is set to hit theaters on November 17, 2023.