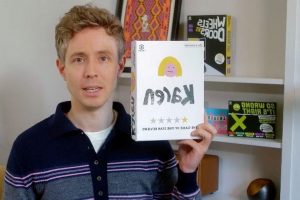 Matt Edmondson wants to be the saviour of the name Karen.

The 36 year old Radio 1 host has announced that he's willing to pay up to 100 people to legally change their names to Karen, which in recent years transmuted into the label you stick on a chronic complainer.

Statistically, the number of newborns being saddled with the name has dropped below 500, so Matt's aim is to save it from extinction.

"There’s a difference between a Karen which is the shorthand for someone complaining and just someone who’s called Karen and is more than likely a lovely person," he told Metro.

"We looked into it and saw there was a huge decline in Karens being born, it peaked in 1965.

"The latest data we have is from 2020 and there are only 325 new Karens and so we figured why don’t we celebrate the name Karen and put some distance between it and the word Karen – we’re on a mission to save the name."

He went on to urge potential suitors to fill in their details over on karennamechange.com, although he's unconvinced anyone will be brave enough to commit.

"We’re going to select someone who puts their details into the website to win a lifetime supply of games.

"We’ve had a fair few people put their details in, whether any of them go through with it and decide to become Karens I don’t know but we’re standing by, our cheque book is ready and we will pay for that name change on their behalf," promised Matt.

Alongside his Karen name-change crusade, the former Xtra Factor co-host is simultaneously launching a new board game through Format Games, centring around the online incarnation of the infamous complainant.

Ahead of its release in time for Christmas, Matt thought it best that he make the clear distinction between the name and the word so as not to insult any unsuspecting Karens out there.

"The reason we wanted to do it was because we released a board game called Karen about complaining and what we didn’t want to do was conflate the idea with everybody that goes by that name – it was a Karen-undrum," he shared.

"We wanted to shout about how great our game was and so that was the aim for us but we were also worried that there could be some people called Karen who might not know this word has another meaning."