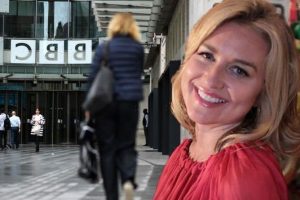 Antonia Quirke, 50, has voiced her opinion on BBC Radio 4’s decision to axe The Film Programme. The weekly film show has run for 17 years.

So tell me this is a dead form!

The British film critic presented The Film Programme, having taken over from Francine Stock.

Speaking in an interview with this week’s Radio Times, Antonia has addressed the situation.

Antonia spoke about how ironic it was that on the show’s last day of recording, Hollywood was opening its biggest ever movie museum.

The critic detailed the sheer size of the museum, and the full list of events it will have.

She said: “So tell me this is a dead form!

Antonia added in angst: “This idea that it’s time we bowed out and film stood behind long-form television or any other kind of screen iteration is just insane to me.”

The presenter was not the only one upset by news of the programme’s cancellation.

In July, an angry letter was printed by The Observer, and drafted by director Carol Morley, that criticised the axing of the long-running show and accused the BBC of shrinking the coverage of arts.

Discussing The Film Programme, the letter said the show “has always been an exemplary blend of coverage of current cinema and the film canon, and an active champion of independent film”.

BBC hastily replied, claiming that the changes they are making will result in more airtime overall for the arts, with the lengthening of established programmes, as well as three new shows.

Mohit Bakaya, Controller Radio 4, said “The Arts matter. At all times, but especially during periods of uncertainty and change, culture provides an important lens that helps deepen our understanding of the world around us. However, the way we are consuming and experiencing the arts and culture is evolving. I’d like our arts programming to be even more ambitious, and intellectually curious. The new film show will explore our evolving relationship with the artform as a result of the changing digital landscape, and the wonderful opportunities for discovery, as well as making fascinating new connections between past and present.”

Film critic Mark Kermode will present a new show on BBC Radio 4 as part of an increased coverage of the arts.

The new film show, Screenshot, will be presented by Mark with co-host Ellen E Jones.

It is described as providing a “kaleidoscopic” look at the world of the moving image, “from cinema to streaming, across decades and genres alike”.

Screenshot will air fortnightly, unlike The Film Programme, which aired weekly.

As well as the new film show, BBC announced that three new regular arts, film, and music strands will launch on Radio 4.

Of these new shows, the flagship live arts programme, Front Row, will be extended to 45 minutes.

Antonia will carry on writing about films for the Financial Times and the New Statesman.

The film critic also regularly presents on Pick of the Week, as well as Film… and The One Show.