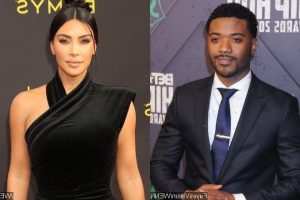 The singer claims that he couldn not get certain jobs because of his public ‘image’ after his sex tape with the ‘Keeping Up with the Kardashians’ alum made its way online.

AceShowbiz -Ray J has spoken up against Kim Kardashian and Kris Jenner. The singer accused the “Keeping Up with the Kardashians” alums of destroying his life by leaking his sex tape with the SKIMS founder.

“I never had a single one at my house – she had them at her house. She’s always had all the tapes in a Nike shoe box under her bed,” he claimed. “That’s how it all came about. Once I pitched the idea to her, just playing around a little bit, that’s when she jumped on the idea, talked to her mom and it was out of my hands from there.”

Ray went on to explain why he “felt suicidal” after the sex tape went public. “When you know something’s real and it’s true and you’re watching a whole family create an empire from a lie they’ve created, it’s heartbreaking and disrespectful to all the entertainers who have been honest and true to their craft,” the singer explained, alleging that he couldn’t get certain jobs because of his public “image” at the time. “Because of what they made me, I’m not allowed to be in those places.”

For me, I’ve been walking on eggshells thinking I’m going to get in trouble for telling the truth and I’ve been holding onto it for the past 14 years and watching them humiliate me,” he continued. “They’re celebrating my destruction.”

Ray also shut down claims saying taht Kanye West retrieved a second sex tape from him in late 2021. “It wasn’t a sex tape – it was a lot of pictures, a lot of little mini videos and a lot of proof we’ve been talking over the years [since our split],” the entrepreneur shared. “If you send me an email in 2008, the computer doesn’t change the date on it.”

Ray J also provided alleged screenshots of a conversation between him and Kim about scenes from her new reality show. After he questioned the comments the California native made about the alleged second tape potentially being footage of her when she wasn’t awake, Kardashian allegedly clarified that she was joking. She also offered to put out a statement making it clear that she wasn’t trying to involve Ray J in the situation onscreen.