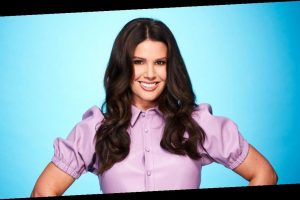 Dancing on Ice contestant Rebekah Vardy has revealed her biggest fear about taking part in the series is that she’ll wet herself.

In a special teaser clip shared by the ITV show, the star contestants opened up about how they’re feeling ahead of taking to the ice for the first time.

Looking straight into the camera in the interview, Rebekah, 38, said: “I'm most nervous about wetting myself.”

The star, who is married to Leicester City football star Jamie Vardy, then started giggling, as she continued: “If you've had kids… you know."

Previously speaking why she wanted to sign up for the show, Rebekah revealed: “I just think I want everyone to laugh at me really.

"I'm really excited actually. The only time I've been ice skating since is when I take the kids to the ice rink at Christmas,” the 38 year old continued.

And the star said her kids are excited to see her strut her stuff – but not so keen on the infamous headbanger move.

Rebekah said in an interview with Good Morning Britain: “I have shown Taylor one of the headbangers, and he just looked at me and said 'mum, there's no way you can do that. I just won't let you do that, you're going to hurt yourself.'”

But fearless Rebekah says she’s throwing herself out of her comfort zone to make the most of the experience, adding: "I went 'don't worry, I'll be fine'."

Rebekah wasn’t the only star of this year’s competition to share her thoughts on what they’re worried about on the final countdown to their Dancing on Ice debut.

While Emmerdale’s Joe Warren Plant added that despite being a regular on our screens, he “still gets stage fright.”

Holly Willougbhby and Phillip Schofield will once again be on hosting duties, as the star skaters try to impress the judges – Torvill and Dean, John Barrowman and Ashley Banjo.

END_OF_DOCUMENT_TOKEN_TO_BE_REPLACED

END_OF_DOCUMENT_TOKEN_TO_BE_REPLACED
We and our partners use cookies on this site to improve our service, perform analytics, personalize advertising, measure advertising performance, and remember website preferences.Ok