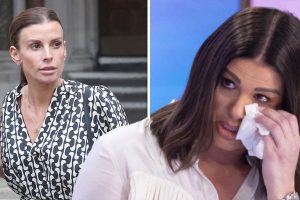 Rebekah Vardy sobbed in the witness box today as she gave evidence on the horrific trolling she says she received after her former friend Coleen Rooney accused her account of leaking fake stories about her to the press.

Coleen publicly called out Rebekah’s account for allegedly selling stories about her, claiming she deliberately planted fake Instagram posts that were only visible to Rebekah’s account, and that they made their way into newspapers.

Her social media post went viral as she accused her fellow WAG’s account of  betraying her trust – something Rebekah has always denied.

Rebekah, who is married to Leicester City footballer Jamie Vardy, is currently suing Coleen for libel.

Discussing the abuse she and her family allegedly received since Coleen’s allegations, Rebekah sobbed, before declining an offer from Mrs Justice Steyn to take a break.

“I’m not going to take you through the trolling,” Coleen’s lawyer David Sherborne said.

Earlier on in the trial today, Sherborne read out exchanges between Rebekah and her agent Caroline Watt.

The court heard that Caroline asked Rebekah: “Am I imagining this or did you say yesterday that Coleen had crashed her Honda?”

“She defo has… Go in the Instagram,” Rebekah replied, according to court documents.

The line of questioning came as on the first day of the trial, Rebekah had agreed it would have been “wrong” for Caroline to look at Coleen’s Instagram on Rebekah’s account.

However, Sherborne put to Rebekah that she had directed Caroline to look at Coleen’s Instagram page through her client’s account, and Rebekah agreed this had been the case.

The car crash story then appeared in The Sun, though Rebekah denies leaking it to the paper.

“If [Caroline] had been monitoring Mrs Rooney’s Instagram, I had no knowledge of her monitoring it and I didn’t ask her for that,” she told the court.

The mum-of-five also denied it was “standard practice” for her to pass information to The Sun via Caroline.

Rebekah admitted that when Danny spent the night in jail for drink-driving, she leaked the story to The Sun – though she insisted it was the only time she did so.

The court was read a message from Rebekah to Caroline, in which she said Danny’s teammates were “fuming”, before adding: “I want payment for this.”

Grilled on this exchange, Rebekah told Sherborne she was “just gossiping” and “speculating” about information she had already read in the press.

“Yes, it doesn’t look good there,” she said in court.

“I was gossiping about things that were already in the public domain. I was just gossiping.”

Referring to her remark about the “fuming” teammates, she added: “It was probably something I was plucking from thin air. It was just a gossip, that was all.”