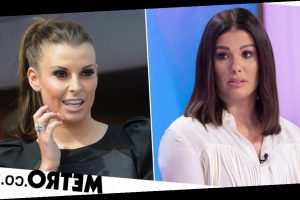 Rebekah Vardy is optimistic about her rift with Coleen Rooney and suggests there could be a ‘resolution’ between them.

The WAGs are currently embroiled in a legal dispute after Coleen infamously accused Rebekah’s Instagram account of leaking fake stories about her to the press.

Now opening up about their trial, Rebekah told Hello! Magazine: ‘The new year could potentially see a resolution between us. I’m pretty sure the public are sick of reading about it, too.’

It comes just weeks after Rebekah, who is married to footballer Jamie Vardy, claimed a victory in the first stage of the libel trial.

However, Mr Justice Warby agreed that the post directly pointed the finger at Rebekah as the source.

Mr Justice Warby ruled that the ‘natural and ordinary’ meaning of Coleen’s posts was that Rebekah had ‘regularly and frequently abused her status as a trusted follower of Ms Rooney’s personal Instagram account by secretly informing The Sun newspaper of Ms Rooney’s private posts and stories’.

Announcing his decision, the judge said that the meaning he had determined was ‘substantially the same as the claimant’s meaning’.

He ruled: ‘I certainly do not think that the ordinary reader would take that single word (account), albeit repeated, to indicate that Mrs Rooney remains in doubt about who the wrongdoer was.

‘There is nothing in these words, apart from the word “account”, that in any way suggests that the behaviour of which Mrs Rooney is complaining might have been carried out by anyone other than the account holder, Mrs Vardy.’

A spokesperson for Coleen said after today’s ruling: ‘Today’s ruling on the technical legal meaning of the post changes nothing.

‘Coleen’s defence to this misguided action was filed last month. It sets out clearly the facts of her case, which remain the same irrespective of any decision on the meaning.

‘The key issues of the case remain the three stories from Coleen’s private Instagram account published by The Sun and Rebekah’s relationship with the newspaper, including its “Secret Wag” column.

‘After three years of stress and anxiety about the leaks from her private social media account, Coleen is keen to see progress made on the real issues, beginning with what Rebekah has to tell the court.’

The court also heard both Mrs Vardy and Mrs Rooney had agreed for a ‘stay’ of the proceedings until February, so there could be ‘one final attempt to resolve the matter without the need for a full trial’.

END_OF_DOCUMENT_TOKEN_TO_BE_REPLACED

END_OF_DOCUMENT_TOKEN_TO_BE_REPLACED
We and our partners use cookies on this site to improve our service, perform analytics, personalize advertising, measure advertising performance, and remember website preferences.Ok