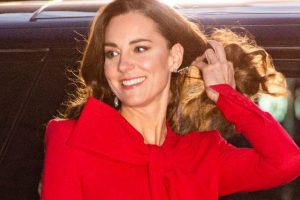 Searches for red dresses have skyrocketed by 376 per cent across the world, after Kate Middleton's gorgeous 40th birthday portraits were released.

The Duchess of Cambridge, 40, was a vision in a red Alexander McQueen gown for her landmark birthday snaps.

Kate wore minimal make-up with her brunette locks styled in loose curls, as she modelled three different gowns by the designer.

And analysis of Google data now shows the red dress was a big hit, with printing and photography experts Printique revealing that searches for ‘red dress’ skyrocketed to nearly five times the average volume in one day.

According to the experts, this is an unprecedented spike. A spokesperson shared: "These new photographs reveal a side of Kate Middleton we’ve never seen before – unafraid, powerful, and with a hint of wildness to her classic beauty, she looks every inch the future Queen."

They were originally a wedding gift to Diana from Collingwood Jewellers, the family jewellers of the Spencer family, and Kate was first spotted wearing them at the Spanish State Banquet in 2017.

A spokesperson continued: "Paolo Roversi has done an extraordinary job of combining classical, idealised elements of royal photography with striking brushes of colour and boldness, from the blown-out look of Kate Middleton’s mane, to the scarlet of her red McQueen dress in one of the photos.

"Another black-and-white photo, which features the Duchess of Cambridge in profile, reflects the ethereal, regal quality of the renowned court photographer Cecil Beaton, who captured historic images of Princess Margaret and the Queen Mother, and searches for ‘Cecil Beaton’ also exploded 669% one day after the photos were released.

"All three photographs already have the feel and weight of history, and will remain iconic images of the monarchy as the centuries progress."

As well as searches for red dresses exploding, data reveals that searches for ‘pearl drop earrings’ jumped 284 per cent across the world on January 9.

The images also feature as part of the gallery’s Coming Home project this year, which is a nationwide initiative that sees portraits of well-known individuals being sent to locations which they are closely associated with.

The shots of Kate will be displayed in three places that have a special meaning to her – Berkshire, St Andrews and Anglesey.

Rather than have a lavish party this year, it looks likely that Kate's birthday celebrations are being toned down, much like her Christmas, due to fears of Covid-19.

Rather than have a large party, it’s expected that Kate will have a smaller gathering, with family and close friends attending.

For all the latest royal updates, sign up to OK!'s Royals newsletter here