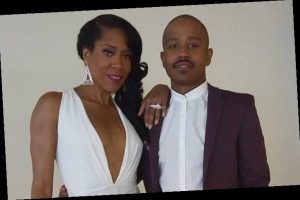 Amid the nationwide Black Lives Matter protests, the ‘Watchmen’ actress says there’s always ‘ongoing conversation’ in her family about how to interact with police just like what happens in other ‘Black homes.’

AceShowbiz –Regina King has opened up about raising a young Black man amid the ongoing fight to end racial injustice across America.

The 49-year-old “Watchmen” actress appeared on “Jimmy Kimmel Live!” on Thursday, June 4, 2020 where she opened up about the ongoing Black Lives Matter protests, in the wake of the killing of African-American man George Floyd at the hand of white Minneapolis cops.

Revealing she’s been having difficult conversations with her son Ian Alexander, Jr., 24, about how to interact with police, Regina explained, “I think in most homes, Black homes, it’s not just a conversation. It’s an ongoing conversation.”

“The anger that they have, it just compounds every time something like this happens. It’s another moment that’s telling them that they’re not worthy… their lives are not valuable once they walk outside of the comfort of their homes.”

Adding that “the conversation shifts every time,” Regina continued, “You have to find a way to support their feelings and make sure that you’re letting them know that you hear them and that you do mirror the same sentiment.”

“But you don’t want them to do anything that’s going to put themselves in a situation that they may not come back home, they may not talk to you again.”

Regina shares Ian with her ex-husband, Ian Alexander, to whom she was married from 1997 to 2007.

END_OF_DOCUMENT_TOKEN_TO_BE_REPLACED

END_OF_DOCUMENT_TOKEN_TO_BE_REPLACED
We and our partners use cookies on this site to improve our service, perform analytics, personalize advertising, measure advertising performance, and remember website preferences.Ok