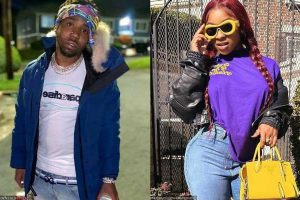 The daughter of Lil Wayne appears to throw shade at her ex-boyfriend as she reveals she’s ‘finally happy’ now when responding to their resurfaced old footage.

AceShowbiz -While Reginae Carter has happily moved on with a new guy, some people apparently can’t get over her past relationship with YFN Lucci. Some Internet users recently let out old videos of the former couple, enraging the daughter of Lil Wayne.

In one of the clips, Reginae and her then-boyfriend appear to have a conversation over a video call. It’s not clear what they were talking about, but she seemingly was upset as she let out an expletive.

Seeing the old footage floating around the Internet, Reginae took to Twitter to slam those who brought them out. “The old a** videos going around gotta stop … I’m in such a great space and I’m finally happy … please stop this narrative,” she wrote on Tuesday, November 22.

Some fans quickly came to Reginae’s defense, with one person replying to her tweet, “Leave it baby.. it’ll handle itself go get pretty.” Another gave their two cents via Instagram, “Ppl love to bring up past events when ppl move forward.”

A third fan commented, “That woman is HAPPY, leave her tf alone! What is a man who’s currently locked up going to do with a woman like her who’s free anyways tho? Let it make sense..” Someone else chimed in, “And this is why some people avoid sharing their lives online because other people ruin their potential fun online.”

Reginae is currently in a relationship with Armon Warren. After sparking speculation that they’re dating with their flirty interactions on some videos posted on social media, they appeared to confirm their romance with a PDA-filled video in September.

In the clip, the YouTube star laid his head on her shoulder, nuzzled her neck and kissed it, prompting her to smile. In another portion of the clip, Armon sweetly wiped something off Reginae’s cheek. He also landed a kiss on her lips which took her by surprise.