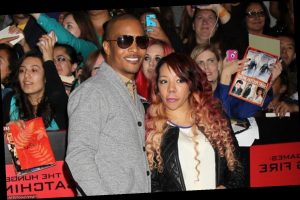 In response to the alleged plan, the Harrises’ attorney Steve Sadow says that they ‘await lawyer Blackburn exposing his anonymous accusers to the light of day by revealing their names’ before being able to ‘confront their allegations with true facts.

AceShowbiz -Lawyer Tyrone Blackburn, who is representing anonymous accusers of T.I., whose real anme is Clifford Harris, and his wife Tiny (Tameka Cottle) seemingly is ready to share more details about the accusations leveled at the musician couple. According to theJasmineBRAND, Blackburn is currently prepping a story with National Enquirer.

More information about the story are still scarce, but a source claims that the piece will be a “spin story that refuses to identify any of the alleged victims.” The insider adds, “Blackburn repeatedly refusing to name the so-called ‘victims’ he represents, you have to wonder what he is hiding from the public.”

In response to the alleged plan, the Harrises’ attorney Steve Sadow said to the site, “The Harrisses continue to deny in the strongest possible terms these scurrilous and unsubstantiated accusations. We await lawyer Blackburn exposing his anonymous accusers to the light of day by revealing their names. Only then will we be in a position to confront their allegations with true facts.”

“By the lawyer choosing instead to misuse the media for his own publicity and hiding the identities of his clients from the public and us, he makes it impossible for us to do so now. We are confident that if the claims are thoroughly and fairly investigated, no charges will be brought,” Sadow continued.

This arrives after Blackburn claimed that 6 more woman have come forward with similar allegations. The New York-based attorney Tyrone A. Blackburn said to The Daily Beast the potential six victims have reached out to him after he sent out a letter to authorities in California and Georgia calling for an investigation into the allegations.

“If I was a prosecutor, I’d have brought charges already,” the attorney, , who is already representing 11 people, including three males, accusing the couple of sexual assault, drugging and kidnapping, said, adding that he had spoken to two offices and has begun preliminary conversations surrounding his clients’ claims with them. However, Blackburn refused to share the details in order to preserve the “integrity of the investigation.”

“This is very sensitive, and I do not want the Harrises to get off on a technicality because I may have disclosed something prematurely or because something may have gotten out,” he argued. “For me, the goal is to get justice for these women, hands down. This is not about money. This is not about clout.”