Jen Shah was determined to get into BravoCon this year no matter what — well, according to one Real Housewives star at least!

As you may know, more than 100 Bravolebrities came together at the Javits Center in New York City for BravoCon over the weekend – but one person who was not on the official guest list? Jen. However, that did not stop the 49-year-old Real Housewives of Salt Lake City star from still joining her co-stars in the Big Apple. In fact, The Real Housewives of Orange County’s Tamra Judge claimed to Access Hollywood on Saturday that Jen attempted to “crash” the “Watch What Happens Live” taping on Friday night, but she was unsuccessful because  of “too much security.”

As for what she desperately wanted to say on the show? According to Tamra, the television personality later showed up at her hotel room to tell her she is “not going to jail, it’s all good.”

“Yeah, it was a bit crazy. She did get to the Gansevoort rooftop party and I think she left quickly. ain’t going anywhere, she said.”

However, Heather Gay and Meredith Marks insisted to Us Weekly that they never saw Jen at the WWHL taping. Heather said:

“What is this crazy rumor? What? Well, Jen Shah doesn’t try to do anything, so if that’s being said, then I would believe it. I did not see her at Watch What Happens Live. Am I fair to answer that? Did not want to implicate myself or others.”

So what is actually going on here? While pictures are circulating on social media of Jen and Tamra hanging out together over the weekend, the RHOSLC cast member actually shut down the claims! She hopped on Twitter Saturday to deny that she tried to sneak into a party and WWHL at BravoCon, claiming she is “getting paid” for the event:

“Anyone believing I crashed anyones party needs a reality check, I am the party, Also I’m getting paid for Bravocon, stop worrying about where I’m at. If I wasn’t at your event, party or panel then it wasn’t worth my time. Thank you for keeping my name in your mouth and trending.”

Damn! Jen also posted Tamra’s interview on her Instagram Story, adding a sticker that reads “Fake News.” Ch-ch-check it out below: 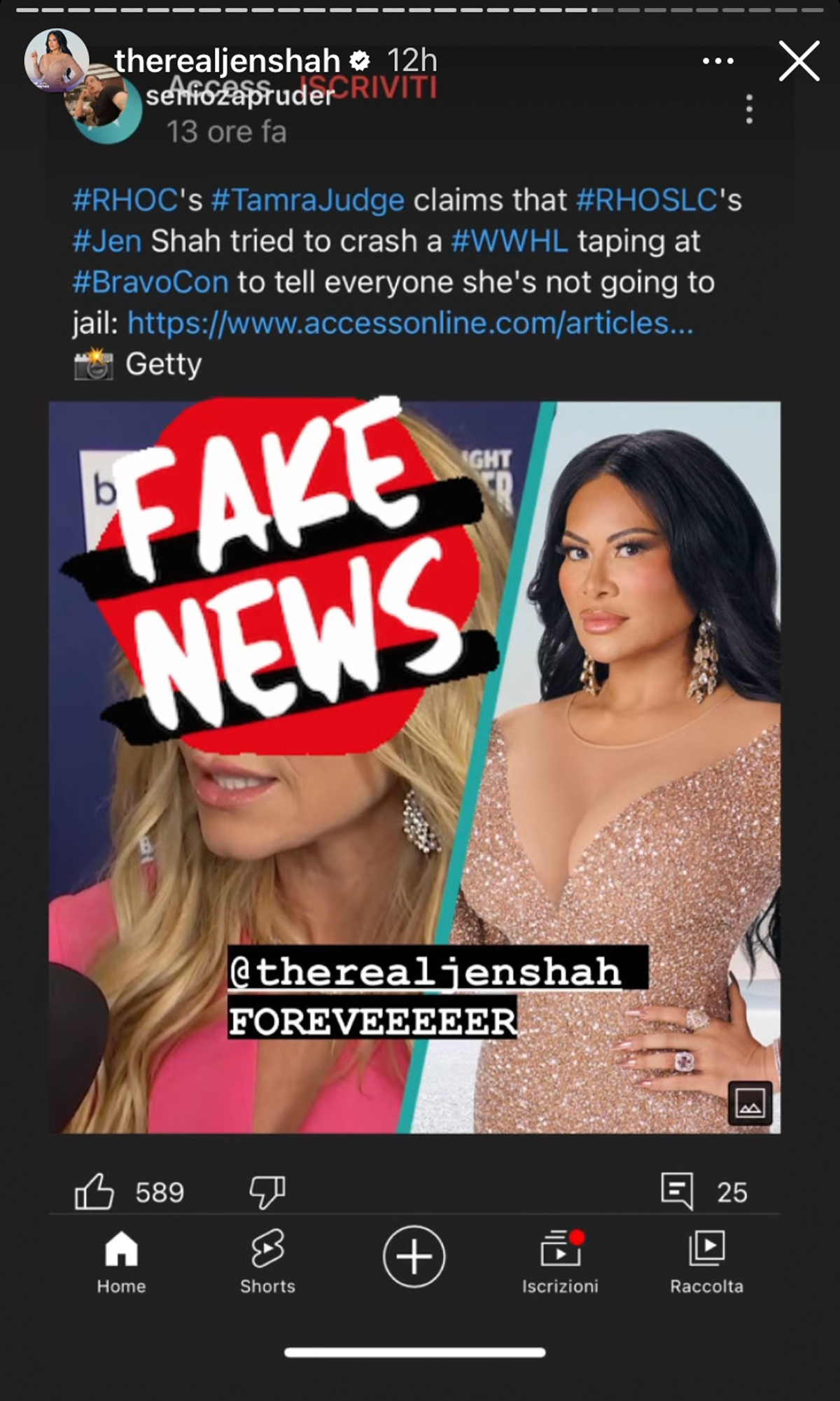 “She plead guilty. I think that was kind of, unfortunately, the end of, you know, the engagement there.”

In 2021, Jen and her assistant Stuart Smith were arrested for their alleged involvement in a telemarketing scam that targeted hundreds of victims — many of whom were senior citizens. After initially pleading not guilty to the charges, she ended up pleading guilty to conspiracy to commit wire fraud and money laundering charges in July. She now faces up to 30 years in prison.

It is never a dull moment when it comes to the Real Housewives stars! Reactions to the drama between Tamra and Jen? Let us know!