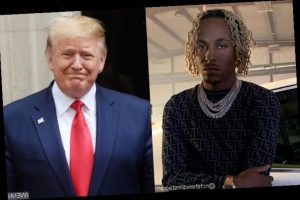 Seemingly thinking that it is impossible, a person questions, ‘Why the hell would he wanna talk to YOU?!?’ while someone else sarcastically suggests, ‘Should of went. First time being on a jet boo.’

AceShowbiz –Donald Trump apparently eyed Rich The Kid as one of his celebrity supporters. The “Too Blessed” rapper took to his Instagram account to claim that the Republican presidential candidate’s team reached out to him, offering to fly him to Michigan where he held his final rally.

“Just got a call Trump tryna send me a jet to Michigan,” Rich The Kid, whose real name is Dimitri Roger, wrote on Instagram Stories on Monday, November 2. “FOH I ain’t no sell out,” he added, adding several laughing emojis.

However, some people didn’t buy his words. Accusing the “Plug Walk” spitter of lying, a fan commented on Instagram, “Ultimate cap, this man cap more than bow wow.” Another user harshly reacted, “He’s lying nobody want a z list artist.” Seemingly thinking that it was impossible, a person questioned, “Why the hell would he wanna talk to YOU?!?” while someone else said, “He lying , he not even getting caIIs from rappers to do features.”

“boy if you wanted to be on that stage just say det,” another unconvinced user added. Meanwhile, someone sarcastically suggested, “Should of went. First time being on a jet boo.”

In response of the allegations, Rich The Kid later pulled the receipts in the form of alleged text messages between him and Trump’s team member. In the exchange, someone could be seen offering to fly him to Michigan alongside Lil Pump.

While Rich The Kid appeared to refuse to endorse Trump, fellow rappers Lil Wayne and Lil Pump recently publicly showed support for the businessman-turned-president. Lil Pump even doubled down his support for Trump by attending the president’s campaign rally in Florida on Sunday.

The “Gucci Gang” rapper, who previously criticized Joe Biden’s tax plan, took to his social media account to share some videos of him at the event. He could be seen wearing a red “Make America Great Again” hat while looking excitedly listening to Trump’s speech.

He also threatened to leave the United States if Trump doesn’t win the election on November 3. “Yo, no cap… If Trump does not get elected, I’m moving the f**k out of here n***a,” he said in an Instagram video, adding, “I’m going to Colombia, f** it.” That only earned him backlash from fans who seemed indifferent by his remarks. “Good. we don’t care,” someone commented. “vote out trump so we can get rid of him too,” another fan urged.

END_OF_DOCUMENT_TOKEN_TO_BE_REPLACED

END_OF_DOCUMENT_TOKEN_TO_BE_REPLACED
We and our partners use cookies on this site to improve our service, perform analytics, personalize advertising, measure advertising performance, and remember website preferences.Ok