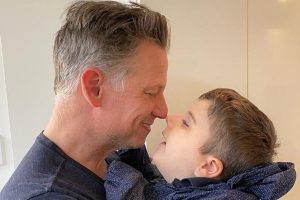 The NBC News Journalist has received condolences from fans and friends alike after announcing on social media that his son Henry has passed away at the age of six.

AceShowbiz –Richard Engel‘s son Henry has died, aged six. Taking to Twitter to share the tragic news, the NBC News journalist said his and wife Mary’s little boy passed away earlier this month after he was diagnosed with Rett Syndrome in 2017, a rare genetic neurological condition.

“Our beloved son Henry passed away. He had the softest blue eyes, an easy smile and a contagious giggle. We always surrounded him with love and he returned it, and so much more,” the 48-year-old foreign correspondent wrote on Thursday (18.08.22).

Richard added a link to a fundraising page while praising the “amazing progress” scientists were making to help “cure” the syndrome. He wrote, “Researchers are making amazing progress using Henry’s cells to help cure RETT Syndrome so others don’t have to endure this terrible disease.”

Dr. Huda Zoghbi, a senior doctor leading Henry’s care, paid tribute to the little boy – who took “a turn for the worse” in May, calling him “special in so many ways” on the Texas Children’s Hospital website.

She said, “Henry was special in so many ways. His loving and endearing smile, and the way he connected with his eyes, stole my heart from the time I met him. His quiet fight against this terrible disease was incredible. What is most amazing, however, is the impact Henry had on so many of us at the Duncan NRI and on our Rett research. We will continue to push as hard as possible to develop treatments. This is how we will honor his life.”

CNN anchor Bianna Golodryga replied to Richard’s tweet, writing, “I’m so, so sorry for your loss. May Henry’s memory forever be a blessing.” Chris Hayes, a journalist with MSNBC said, “We are all heartbroken, Richard and also have been and continue to be inspired by your love and devotion.” TalkTV’s Piers Morgan offered his condolences, adding, “How incredibly sad. My deepest condolences to you and all your family.”