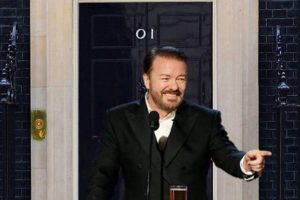 Ricky Gervais is just one of many stars who has jokingly put themselves forward to be Liz Truss’ successor. A new Prime Minister will lead Britain as of next week following her short-lived time at Number 10.

After her farewell speech. comedian Ricky shared a photoshopped picture of himself from the Golden Globes on stage with a pint of beer outside Downing Street.

The 61-year-old uploaded the post alongside a thumbs up emoji in view of his 3.6 million followers.

Many flocked to his post backing the comedian to become the new leader.

Poet.howard commented: “Everyone in the UK voted, he’s now the new Prime Minister.”

Tonyh_sladegreen wrote: “Least we’d get rid of the b******t and see some plain speaking… got my vote.”

Lewis__coombes added: “You’d set the country straight within a week!”

Ricky also shared the picture on his Twitter page, writing: “And it wouldn’t even be in the top 10 weirdest news stories of the year.”

Piers Morgan also took to his social media pages to share a picture of him outside 10 Downing Street.

He simply wrote: “It may be time.”

His post came after he branded Liz’s short-lived time as the Prime Minister “a shambles”.

He tweeted: “It’s over. Liz Truss is resigning and will become shortest-serving Prime Minister in British history. What an absolute shambles.”

Piers went on to say Rishi Sunak is now the “right person” to lead the country.

Like Ricky, she photoshopped a picture of herself outside the leader’s official residence.

She commented: “Everyone else has had a go. Let’s roll the [dice] My turn. After all it’s all just a game isn’t it? Isn’t it?”

Many backed the idea of Nadia running the country including Katie Piper, who wrote: “Why not, you would be great.”

On Twitter, Iain Stirling wrote: “Liz Truss’s reign as Prime Minster was shorter than a series of Love Island.”

Richard Osman commented: “No-one used to resign until I resigned from ‘Pointless’. Now they’re all at it. I think I made it cool.”

Gary Lineker typed: “Another Prime Minister resigns. Would you fracking believe it?”

A new Prime Minister will be announced next week.