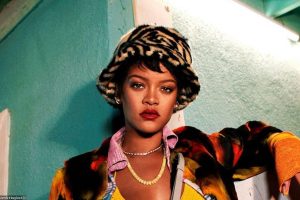 The 22-year-old man receives his jail sentence after pleading no contest to the charges of first-degree burglary for stealing over $50,000 in cash, plus watches, jewelry and designer purses with his accomplices.

AceShowbiz -Tyress Williams has been sentenced to nine years behind bars. The man, who allegedly burglarized the Los Angeles homes of Rihanna, Christina Milian, former Dodgers Yasiel Pluig and other A-listers, received his jail sentence after pleading no contest to the charges of first-degree burglary.

In photos obtained by Daily Mail, the 22-year-old man was seen wearing an orange prison uniform and handcuffs as a judge handed down the sentence on Thursday, October 7. Back in September, he pleaded no contest to the burglary charges.

Tyress was only 19 years old at the time of the 2018 robberies. At the time, he and his other four accomplices, who were part of a larger burglary ring targeting Hollywood stars and producers, broke into the homes of singers Rihanna and Christina as well as athletes Yaisel and Robert Woods.

In October that year, authorities at the Los Angeles Police Department arrested Jshawne Lamon Daniels, Tyress Lavon Williams and Damaji Corey Hall a day after they allegedly robbed footballer Robert’s home in Woodland Hills. Damaji’s mother, Ashle Hall, was also arrested two days later for the connection to the burglaries. The three teenagers were all charged with burglary, while Ashle was charged with grand theft.

Lillian L. Carranza, Commanding Officer of Commercial Crimes Division for the LAPD at the time, said at a press conference, “The burglars believed no one would be home and the homes would contain sought-after valuables that they might be interested in.” The authorities dubbed the process “flocking,” where the group would allegedly all drive around the area in luxury cars and clothing.

“Once a potential target home was selected, a larger vehicle would be utilized to give the suspects the opportunity to change into more comfortable clothing and hoodies to avoid being recognized and cart away the stolen goods,” Lilian further explained. She then added that the suspects would grab valuables within minutes and make a run for it before alarm companies could respond.

The police officers allegedly recovered more than $50,000 in cash as well as designer handbags, watches and jewelry, as well as a stolen vehicle at one of the suspects’ homes. During their search, the investigators also found a list of future celebrity targets which included Viola Davis, LeBron James and Matt Damon.