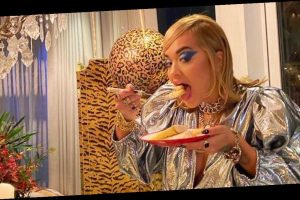 Rita Ora is understood to have lost 200,000 Instagram followers after she apologised for breaking coronavirus rules.

The I Will Never Let You Down singer, 30, lost followers across her social media platforms after she apologised for throwing a party at a swanky Notting Hill restaurant in November.

Rita apologised at the time and paid a £10,000 fine for what she called a “small gathering”.

But, a week later it was revealed Rita had broken another rule by having the celebration as she was failed to have isolate following a trip to Egypt.

The Masked Singer judge Rita apologised once again and urged people to who “might seek to follow her example” to “be better”.

But, the singer received criticism from other celebrities, including Lorraine Kelly, and her TV advertising campaign with EE was reportedly quietly ended early.

It appears Rita is still suffering the consequences of her rule breaking, as The Sun has reported she has lost 200,000 Instagram followers and 90,000 followers on Twitter.

Following her rule break, Rita reportedly launched a probe to find out who leaked the news of her illegal, secret birthday bash.

An insider told The Sun in December: “Rita's transgression coming to light has left her humiliated, not to mention potentially out of pocket, as she's agreed to pay a £10,000 fine once it's issued.”

The source went on to claim that the pop star's close pals have been telling her that it could have been someone who wasn't invited to the party who alerted the authorities.

They added: “Some of her closest confidantes have been getting in her ear suggesting someone on the guest list with a guilty conscience or a scorned friend who didn't make the cut may have dobbed her in.”

Rita was reportedly left paranoid after police and photographers showed up outside the Casa Cruz restaurant in Notting Hill, West London, as her party took place.

The insider added: “It was meant to be a secret, but the fact police and photographers knew it was happening has really made Rita paranoid.

“She's now devising a game plan and setting traps in a bid to expose the whistleblower, like Coleen did in the Wagatha Christie drama.”

Speaking of the movie, during which she plays a female Artful Dodger, she told Hits Radio Breakfast: “It was, what, 1839 when Oliver Twist came out for the first time. It was his interpretation of street slang and life on the streets.

“For us now, shooting it in this time, it’s our interpretation of life on the street. So I really love that I was a part of that progression.”