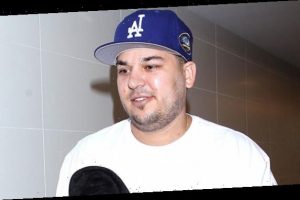 Kourtney Kardashian gave her millions of Instagram followers a blast from the past when she posted a string of throwback photos featuring her brother Rob! See his mid-2000s look!

Kourtney Kardashian gave her little brother, Rob Kardashian, a fun surprise when she shared throwback photos of the two of them from 2007! In the snaps, which Kourt, 41, shared to her Instagram account on November 11, the now-mother-of-three posed-up at the dinner table showing off her best “duck face,” pursing her lips in the popular pose. Meanwhile, Rob, who was roughly 20 years old at the time the photo was taken, looked very busy messaging on his Blackberry — remember those?!

The second photo in the carousel post featured Kourtney showing her little brother, now 33, a message on her Blackberry. And the final pic was a close up of Rob, with much longer and shaggier hair, doing his own duck face for the camera! Rob also sported a glimmering earring in the photos and looked so young!

“Hey Bob, do you miss BBM?” Kourtney captioned the pics, utilizing the acronym for Blackberry messenger. In the comment section of the post, Rob commented back admitting that he missed BBM! “Aghhh I dooo lol,” he commented on the images. Even the siblings’ sister, Kim Kardashian, got in on the fun, confessing that she, too, missed the messaging application. “I miss bbm,” she simply said.

It was such a fun blast from the past for Kourtney’s 103 million Instagram followers to see. The post also offered some major hindsight, as fans looked back on how Rob looked in 2007 and now see how far he has come in his journey. Rob has been working so hard on his fitness, and showed off his weight loss on Kim’s recent 40th birthday trip. You can see that photo above.

“Rob feels better than ever and has worked really hard to lose the weight,” a source shared EXCLUSIVELY with HollywoodLife. “It’s something that doesn’t happen overnight and he’s so proud of what he’s accomplished.” Rob’s goals have all aligned with being there for his now four-year-old daughter, Dream. The father-of-one, who shares Dream with ex Blac Chyna, has been “eating much healthier” and working out to get back to his ideal form. With all of the success he has had thus far, fans cannot wait to see Rob continue his journey. As those 2007 photos show, the reality TV star has come such a long way!