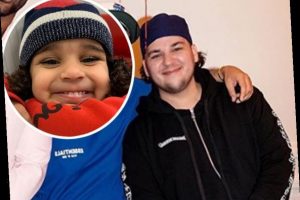 The KUWTK star took to Instagram on Tuesday to share an unfairly adorable picture of his 3-year-old daughter Dream Kardashian smiling from ear to ear bundled up in a beanie and sweater.

While the tot was barely tall enough to reach the table at the booth they were both sitting at, she looked ecstatic to be with her daddy. See the pic (below):

Naturally, the pic was flooded with comments from supporters and admirers who wanted to send their love — one of which being Khloé Kardashian, who dropped a string of heart emojis in the comments.

The new pic of Dream comes amid rumors that Rob will be making his hotly-anticipated comeback on the family’s E! reality series. As we reported, KoKo teased the sock mogul’s future return during an interview with SiriusXM Hits 1’s The Morning Mash Up earlier this month, telling listeners:

“My brother’s coming back around. Like, he’s feeling more confident comfortable. So I think he just started a whole new season.”

Off screen, it appears Rob’s going through a new season of his life in general.

An Entertainment Tonight source previously shared the new-and-improved version of Kris Jenner’s son “takes care of himself, works out and eats better” as a priority rather than an afterthought, telling the outlet:

“Rob is in the best place, he hasn’t been doing this well in years. He’s been taking his workouts and eating well serious and has seen significant results. Rob is much happier and has been around his family more after years of being a homebody… For a long time, he was unhappy and embarrassed about the way he looked. He knows he looks better. He is comfortable enough to be photographed. He wants people to know that he is doing well.”

Meanwhile, a separate source told E! News that constant quality time with Dream during the coronavirus quarantine has had a positive effect on the star’s overall mental health, sharing:

“Rob has been thriving during quarantine. He is loving spending time with Dream and entertaining her with activities. He is always sharing her milestones with his sisters and loves teaching her new things. Dream is his number one priority.”

Looks like it, based on Rob’s ‘Gram! Hopefully we get to see more of Dream — and Rob — on next season of Keeping Up!