Home » Celebrities » Rob Kardashian Shares Sweetest Pic Of Dream, 3, With Her Natural Curls On The Beach

Rob Kardashian Shares Sweetest Pic Of Dream, 3, With Her Natural Curls On The Beach 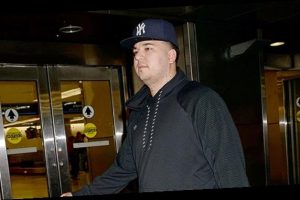 Rob Kardashian just can’t get enough when it comes to sharing photos of his gorgeous daughter Dream. The pair had a day at the beach, and she looked so precious getting ready to build a sand castle.

Life’s a beach for Rob Kardashian and his three-year-old daughter Dream Kardashian. The pair took advantage of the warm July weather to have some fun in the sun. The 33-year-old sock designer shared a photo to his Instagram account on July 15 of his growing girl in her swimsuit while they played in the sand at the beach. She had her long hair flowing free in ringlet curls, which cascaded down from the adorable straw sun hat atop her head.

Dream was wearing a pale pink one-piece swimsuit colorful straps on the back. It didn’t appear as if she had gone for a dip in the ocean, as she was happily playing on the beach. Her orange beach bucket had some sand in it, as if she was about to start building a sand castle, while a bright yellow shovel could be seen nearby.

It might have been a beach day with relatives, as Dream was seen at the base of private stairs. Rob’s sister Kylie Jenner, 22, just shared several IG photos on July 14 of her walking down a long white wooden stairway to a private beach, and it looked about the same as what was visible in Rob’s photo. Kendall Jenner, 24, was photographed enjoying a beach day in Malibu with pal Jaden Smith. Meanwhile, Kourtney Kardashian, 41, on July 15 shared in IG stories video looking out at the ocean from about the same vantage point on the beach, so hopefully Rob and Dream are having some quality time with his family in Malibu.

Before posting the beach photo, Rob shared several videos of Dream where fans could hear her sweet voice. In the first video he posted to the ‘gram on July 15, Dream was jumping up and down on a backyard trampoline while wearing a fun multicolor tie-dyed shirt. Her daddy cheered her on, saying “Keep going,” repeatedly until she decided it was his turn, sweetly telling him, “No, you!”

Tomato or toMAAAto??? And Maple Syrup versus MEGA syrup 🤪🤪🤪

Rob then shared another video, showing Dream cooking in her playhouse kitchen, apparently taken the same day as she had the same outfit on. The pair sweetly debated over the pronunciation of “tomato,” as Dream sounded so sophisticated by calling it “to-mah-to.” She then whipped up a plastic vegetable meal, and the pair got into another cute debate over syrup, with Dream drizzling “mega syrup” on her toy food concoction, while Rob tried to get her to say “maple syrup.” Dream’s hair was done up in long heavy braids in both videos, so it’s unclear what was more current, her backyard and playhouse date or their trip to the beach. Either way, Dream sure is the cutest!