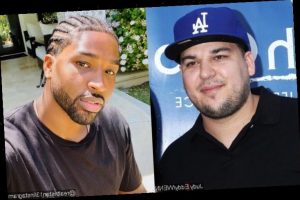 Meanwhile, some people can’t help but compare the NBA player to a character in ‘Grand Auto Theft’ video game as some others think he looks like he’s ready to appear in a Tyler Perry movie.

AceShowbiz –Tristan Thompson has decided to switch up for a new look this year. The Canadian basketball player is usually seen with his signature closely cropped curls, but on Friday, July 24, he showed his 3 million followers on Instagram a brand new hairstyle that got him compared to all sorts of things.

Taking to the photo-sharing site, Tristan uploaded an image of him showing off his perfectly shaved beard and freshly braided hairstyle. The Cleveland Cavaliers athlete paired the new look with a black T-shirt and stud earrings as he smized for the camera. “New look,” so he wrote underneath the image.

Even though a number of his celebrity friends had nothing but compliments for him, it didn’t seem to be the case with the rest of online users. Some compared him to a character from the popular video game, “Grand Theft Auto”, while some others think that Tristan looked like he was more than ready to appear in a Tyler Perry movie.

“He look like a gta character,” one said. “Must be a new Tyler Perry movie on the way,” another commented as someone similarly wrote, “Looking like a Tyler Perry’s character, the one that has a good heart but no money.” Someone else chimed in, “He looks like the GTA San Andreas character.” Meanwhile, an individual wondered, “Auditioning for a Tyler Perry movie ?”

Rob Kardashian was also among those who trolled Tristan over his braided hairstyle. Taking to the comment section of a gossip blog’s article about it, the “Keeping Up with the Kardashians” alum jokingly asked, “Jake Shuttlesworth?” For those who don’t know, Rob was referring to Denzel Washington‘s character in the 1998 movie “He Got Game”.

Many found his comment funny, with more than 600 people hitting the love button. “That was funny,” someone admitted. “Ok Rob w/ the jokes. miss this dude He needs his Own gram back,” one other said.