Home » Celebrities » Romy Reiner on What She Learned From Her Grandfather, Legendary Entertainer Carl Reiner

Romy Reiner on What She Learned From Her Grandfather, Legendary Entertainer Carl Reiner 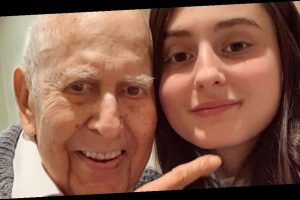 In our Reasons for Hope in America series, we spotlight thought leaders who are rewriting the rules for a brighter future.

You knew it was going to be a good night at my grandfather’s when it started out with feather plucking. He had these sage-colored couches and pillows filled with tiny feathers that would poke out and stick you in the back. Over the years my grandfather; his best friend, Mel Brooks; and countless other guests would come over and pluck them out, accumulating many large plastic bags filled with feathers. This brought him such pleasure. It was always the little traditions that he seemed to cherish most.

When I was growing up, he was just my grandfather, not the entertainer and writer so many knew him to be. As I got older and my interests became clearer, I realized I was more like him than I thought. When I started writing about five years ago, he said, “Just keep writing; don’t ever stop.” He was so driven. He was still working on books at 98, right up until he passed away in June. I think he was even on Twitter before me — and his Twitter game was strong.

He had many loves: ice cream, breaking into song, telling (or retelling) stories to his grandchildren, and Sandra Bullock. There was never a dull moment with him. He could recite a Shakespearean soliloquy at the drop of a hat or imitate the loving cry of his old dog, Rinny. And even though he was almost 100 years old, he could still use a television remote better than either of my parents. I once shared a short story with him that I wrote called The Widow, a dark comedy piece about a woman who hates the morgue attendant who was chosen for her dead husband. He told me that even though it was only a few pages long, he knew I was a writer. Hearing that meant so much to me. He also told me what an incredible dancer I was, and, truthfully, that made me rethink his opinion of me as a writer. But he still had the biggest heart, always showed kindness to people, and just wanted everyone to be happy.

One of the best pieces of advice that he gave to my father [Rob Reiner] was: “Write about whatever is an extension of you, take from your own experiences, and use that as a guiding principle for your work.” My dad echoes the same sentiment to me today.

These days horror and comedy are the two subjects I gravitate toward. But I’m also working on a romantic comedy called Born Again Virgin that was picked up by Warner Bros. TV. My grandpa was unique in that he created The Dick Van Dyke Show, which was the first sitcom to show the head of a family both at home and at work. I hope to follow in his footsteps by breaking norms and creating new ways to tell a story.

But my grandpa wasn’t just a creative artist. He was also a force for justice and morality. His and my father’s political engagement has definitely rubbed off on me, and I’m thankful for that. This November I will be voting in my grandfather’s honor. Wouldn’t it be nice to elect someone who believes in science, respects women, honors the Constitution, and doesn’t bully people on a daily basis? Although my grandfather’s work filled everyone’s lives with laughter, this election is no joke. Above all, he taught me to speak up for a better future for this country. Let’s make it happen for him.

For more stories like this, pick up the November 2020 issue of InStyle, available on newsstands, on Amazon, and for digital download Oct. 23rd.

END_OF_DOCUMENT_TOKEN_TO_BE_REPLACED

As an American, I have no place to judge how other countries are handling or mishandling their pandemics. America, as a country, is riddled with […]

END_OF_DOCUMENT_TOKEN_TO_BE_REPLACED

END_OF_DOCUMENT_TOKEN_TO_BE_REPLACED
We and our partners use cookies on this site to improve our service, perform analytics, personalize advertising, measure advertising performance, and remember website preferences.Ok