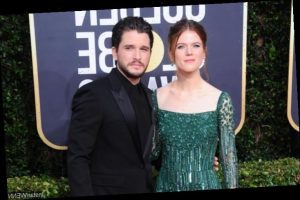 The ‘Death on the Nile’ actress addresses her pregnancy for the first time after debuting her baby bump for an issue of the U.K.’s Make Magazine last month.

AceShowbiz –Rose Leslie is more than ready to welcome her first child with husband Kit Harington. Nearly a month after she came forward with news of her pregnancy, the “Death on the Nile” actress said she “can’t wait” to give birth to their unborn baby.

The 33-year-old mom-to-be opened up more about her pregnancy when speaking to The New York Post on Wednesday, October 21. “I am thrilled to be expecting,” she gushed, “and I can’t wait to meet the new member of our family!”

Leslie’s statement came nearly a month after the Maia Rindell of “The Good Fight” debuted her baby bump as part of her cover story in an issue of U.K.’s Make Magazine. Sharing the maternity shot of the actress in a long black dress was the magazine via its Instagram account on September 27.

“Not many people can pull off a Stella McCartney floor-length silk frock and a fashion shoot when expecting a baby,” its caption read. “But Rose showed no sign of fatigue on our world exclusive fashion shoot for the latest issue of Make.”

Leslie and Harington met on the set of HBO’s “Game of Thrones” when they portrayed on-screen lovers, Ygritte and Jon Snow. They sparked romance rumors in 2012. Having gotten engaged in September 2017, the twosome tied the knot less than a year later in Scotland.

The married couple is currently enjoying their time together in her country manor house in East Anglia, England. She jokingly described it as “the house that Jon Snow built” in her Make Magazine interview.

“It’s incredibly old,” Leslie told the outlet. “We have a thatched roof, which currently has an enormous hornet’s nest in it. I do love to think about the house and all the people who have lived there: ‘Were they happy, how did they live?’ “

The actress who appeared as Gwen Dawson in several episodes of “Downton Abbey” continued, “What a glorious thing to be able to run to the countryside and recoup. It’s a great privilege to be surrounded by greenery, birdsong, and hedgerows, and our delightful neighbors. It’s so peaceful.”

END_OF_DOCUMENT_TOKEN_TO_BE_REPLACED

END_OF_DOCUMENT_TOKEN_TO_BE_REPLACED
We and our partners use cookies on this site to improve our service, perform analytics, personalize advertising, measure advertising performance, and remember website preferences.Ok