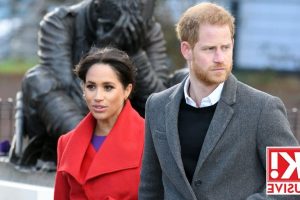 Prince Harry andMeghan Markle are unlikely to Facetime theRoyal Family this Christmas, an expert has said.

Relations between The Firm and the Duke, 38, and Duchess, 41, of Sussex have soured since the couplestepped back from senior royal life in 2020.

Tensions have heightened over the past week following the release of Harry and Meghan’sNetflix documentary – and are likely to rise further still after the release of the Duke’s autobiography Spare next month.

And while Jennie Bond expects Prince William and Princess Kate, both 40, to joinKing Charles andCamilla, Queen Consort for Christmas Day at Anmer Hall on the Sandringham estate, she does not believe Harry and Meghan will feature in the celebrations at all.

She added: “In normal times you’d expect William and Catherine and Charles and Camilla to at least FaceiTme Harry and Meghan but I can’t really see that happening. You’ve still got [Harry's book] Spare hanging over them as well.”

She said: “I really thought the death of – if not the Duke of Edinburgh – then certainly The Queen would bring them together.

“There will be an ever-present empty chair at Christmas as most of the family have only ever known Christmas in the company of The Queen.

“But neither of those things happened. So, I can’t see Christmas making a difference.”

In the latest bombshell trailer for the Sussexes’ Netflix documentary, Harry appeared to take a swipe at William and The Firm –accusing the monarchy of “institutional gaslighting”.

He told the camera that ‘they were happy to lie to protect my brother’ but ‘were never willing to tell the truth to protect us’.

Jennie Bond said she believed the trailer would have left the Royal Family feeling"despairing, dismayed and disappointed".

She also claimed the decision to include a clip of Diana's Panorama interview in the Netflix series was“blatantly, openly and pointedly hurtful” to Prince William.

The Prince of Wales, 40, has previously said that the 1995 BBC programmeshould never be shown again after it was revealed how shamed journalist Martin Bashir used deceitful tactics to convince Diana to take part in it.

However, midway through the first episode of the Harry & Meghan documentary,clips are shown of Diana speaking in the controversial interview – which is said to have left William"furious".

Ms Bond also claimed that King Charles 74, will not directly respond to the show unless there is a“direct hit” on 75 year old Camilla.