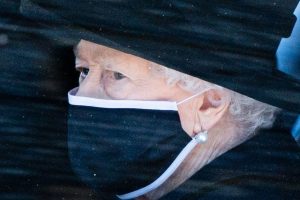 The Royal family will be surrounding the Queen ahead of her 95th birthday this week, following the death of her husband, Prince Philip.

Family members are said to be making arrangements to see Queen Elizabeth II this week, including on her birthday, at Windsor Castle and will be using a rota to take it in turns to see her, in line with the government’s Covid restrictions.

A source told The Mirror: “The Queen will not be alone.

“She will have others who care about her deeply and want to be there to support her in her most pressing hour.

“In typical fashion the Queen has insisted she is coping and despite the suggestion she had prepared herself for this day to come, everyone is well aware there is nothing like the experience when it comes.”

The publication reports that several senior female royals plan to support the Queen through her time of mourning, including Princess Anne, Kate Middleton, Camilla, the Duchess of Cornwall and Sophie, the Countess of Wessex.

Prince Charles is expected to make the 90-minute drive from his country home in Gloucester to visit the Queen this week along with his sister Princess Anne.

The Countess of Wessex is also said to have arranged to visit the Queen alongside her two children, Louise, 17, and James, 13.

The Duchess of Cambridge, who will not be visiting the Queen on her birthday, has reportedly arranged several video calls with Prince William and their three children on her special day.

It has been reported that a portrait will not be released to mark the Queen's 95th birthday this week, while she mourns the loss of Prince Philip.

It has also been suggested that Prince Harry may delay his return to his wife Meghan Markle in the US to celebrate the Queen’s birthday.

One source told The Sun: “If all goes well, he could stay for the Queen’s birthday.”

Prince Harry and his brother Prince William were seen talking for the first time after the Oprah Winfrey interview aired back in March, after the Duke of Edinburgh's funeral on their walk back to Windsor after the ceremony.

More than 13 million viewers tuned in to the sad occasion on Saturday as Prince Philip made his final journey to St George’s Chapel in his custom-made Land Rover which he helped design in his final years.

The service itself was arranged to the letter of the wishes of the late Duke of Edinburgh, right down to the music which he selected himself.

Although there were some changes which had to be put in place to keep in line with the government’s Covid restrictions, meaning that only 30 people could attend the service.