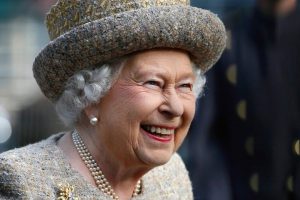 British royal family fans have shared their joy at the Duke and Duchess of Cambridge‘s 2021 Christmas card and many can’t help but notice one remarkable fact – Princess Charlotte is the spitting image of Queen Elizabeth II. In the snap William and Kate are pictured with their three young children Prince George, Princess Charlotte and Prince Louis in a family photo that was taken privately earlier this year on a visit to Jordan.

However fans were quick to comment on the likeness of the young princess and her great-grandmother, with one writing: “The older Princess Charlotte is getting the more she is becoming more like Queen Elizabeth.”

WATCH: The next generation of young royals

The picture was shared on the Cambridges’ social media accounts and read: “Delighted to share a new image of the family, which features on this year’s Christmas card.”

By way of a contrast to Christmas cards from previous years, the royals were dressed in summer clothing but still perfectly coordinated as they usually are for family portraits.

Kate was her typically chic self in an olive green dress, while William opted for smart casual in a polo shirt and shorts. George, eight, Charlotte, six, and little Louis, three, all beamed for the camera, suitably dressed in summer wear.

The family pose for their 2021 Christmas card

The Queen is close with her grandson Prince William and his wife Kate, and regularly sees her great-grandchildren.

During a recent face-to-face engagement at Windsor Castle the Queen appeared to share a previously unseen photograph of her great-grandchildren as the frame could be seen behind the monarch next to her signature black handbag on a console table.

It looks to show Her Majesty and her late husband, the Duke of Edinburgh, posing for a photograph with five of their great-grandchildren.

Princess Charlotte appears to be sitting on her great-grandmother’s lap, while big brother Prince George stands behind the sofa in a navy collared jumper.

Meanwhile Peter and Autumn Phillips’ eldest daughter, Savannah, seems to be standing next to her great-grandfather, wearing a mauve coloured dress, while younger sister Isla is at the opposite end.

The previously unseen portrait could be seen on the table

Mike and Zara Tindall’s eldest daughter, Mia, looks to be sitting in the middle, in a navy collared dress.

The ages of the children in the photograph suggest it was taken before 2018, as Prince Louis and Lena Tindall do not appear to be present.