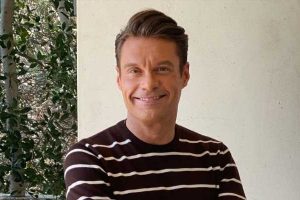 The ‘American Idol’ host appears close to the brunette young lady as he arrives in style on a helicopter on New York’s west side highway Heliport with his female companion.

AceShowbiz –Ryan Seacrest seemed to have found a new love following his split from Shayna Taylor. A year after calling off his relationship with his on-and-off-girlfriend, the “American Idol” host was spotted spending Memorial Day Weekend with a new brunette mystery woman in the Hamptons.

In photos obtained by DailyMail.com, the 46-year-old TV personality appeared close to his new much-younger-looking companion. The couple was spotted landing by helicopter on New York’s west side highway Heliport amid a rush of other A-Listers flying into the popular destination for Memorial Day Weekend.

Ryan could be seen walking side-by-side with the brunette girl to his chauffeured Range Rover after they walked out from the aircraft. Seemingly ready for a pleasant vacation, the TV host sported a white striped polo shirt and a pair of denim pants. He was also captured wearing white hat and carrying a black leather Prada luggage.

In the meantime, his rumored new girlfriend donned a basic olive-colored slim-fit T-shirt and denim Daisy Dukes hot pants. To complete her look, she paired her outfit with white sneakers and black sunglasses.

The Hamptons vacation sighting came nearly a year after the “Keeping Up with the Kardashians” executive producer called it quits with Shayna. Prior to his split from the 29-year-old entrepreneur, he was spotted with a mystery blonde in Cabo San Lucas, Mexico. Most of the pictures displayed the two soaking up the sun on a sun lounger in a resort. One, in particular, captured them holding hands.

For his Mexico trip, Ryan reportedly took a private jet along with real estate mogul Mike Meldman and a group of friends to catch up on some rest in Cabo San Lucas. As for his time there, an inside source told E! News, “He spent the whole time with his new lady at their private villa.”

Of his breakup with Shayna, a representative for the “Live with Kelly and Ryan” host noted in a statement to the press that the former couple “decided to end their romantic relationship amicably some time ago.” His rep further added, “They remain good friends, each other’s biggest supporters and will always cherish their time together as a couple.”