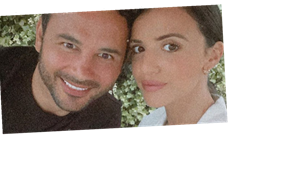 Ryan Thomas has opened up about self-improvement after receiving a backlash about his comments on his parenting.

The former Coronation Street actor was criticised by fans after saying that he misses the “old Lucy” in reference to his fiancéeLucy Mecklenburgh before she became a mum to their nearly one year old son Roman.

Speaking with his brothers Adam and Scott Thomas on their Mancs on the Mic podcast, Ryan revealed that he misses spending quality time with Lucy and that they don’t have any time just the two of them since Roman’s arrival.

He explained: “I always say to her, ‘I want the old Lucy back sometimes’. It's not that she's not there, it's just I'm not the main priority any more, Roman comes first.

“I just miss that. I said to her the other day, ‘Shall we just go away, the two of us? Let's go away for like a long weekend or something’.

“I'm like, ‘I just want to escape our parenting for a long weekend and just let our hair down like we did before he was here’.

“I think that time will come eventually and I'm really holding onto that because the good thing about being a parent is you still enjoy each other’s company without your children. And if you don't there's no longevity in your relationship.”

Following his comments Ryan took to Instagram to open up about improving himself.

The 36 year old shared a quote reading: “There is no challenge more challenging than the challenge to improve yourself”.

He captioned the post: "Self improvement" alongside a raising hands emoji.

Ryan also shared another quote on his Instagram Story reading: “If you don’t challenge yourself, you will never realise what you can become.”

Ryan received a barrage of comments for his views online, with one writing: “Wow, just what a new mum wants to hear” while another added: “Babies come first”.

Ryan and Lucy, 29, have been together since May 2017 after meeting on Bear Grylls’ Celebrity Island.

They announced their engagement two years later before welcoming son Roman in March 2020. Ryan is also dad to Scarlett, 12, with his former Corrie co-star Tina O’Brien.

The star recently revealed Lucy mentioned the pair expanding their brood even further, but Ryan said he’s not quite on board with the idea just yet,.