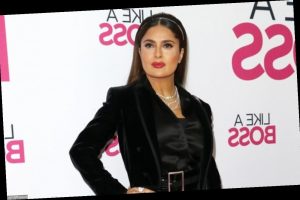 The ‘Bliss’ actress recalls in a new interview that she was told her career wouldn’t last long because at the time ‘it was impossible for a Mexican to have a leading role in Hollywood.’

AceShowbiz –Salma Hayek is pleased with her success in the entertainment industry despite hardship she faced due to her nationality. Revealing that she was once told it was “impossible” for her to have a leading role in Hollywood because she is a Mexican, the “Bliss” actress declared that she is “proud” to have proven the opposite.

“They told me my career would die mid-30s. First of all, they told me a Mexican is never going to make it, because at the time, the new generations, it was impossible for a Mexican to have a leading role in Hollywood,” the 54-year-old told PA news agency. “And it was like it was not real – it was like this strange reality that now has become a normality. But not at the time.”

Salma went on to express her excitement for being able to overcome such challenges in the film industry. “And I think it’s great, I’m proud of it, I want to shout it to the world, because I was told so many times it couldn’t happen and I almost believed them but I fought it and I won,” she pointed out.

One of the challenges that Salma had gone through was working with Harvey Weinstein for her 2002 movie, “Frida“. In another interview with Evening Standard, she admitted that she initially thought collaborating with the disgraced movie mogul was “a dream come true,” but soon found herself being repeatedly asked to have sex with him.

On how she felt knowing Harvey was sentenced to 23 years in jail for rape and sexual assault, the “Savages” star said, “The amazing thing is that I thought I had healed.” She added, “And then everything came out again and I realised I didn’t heal, I repressed and I coped, I adjusted, I went on, so there was a layer of healing because it didn’t stop me from growing.”

“It was very painful for a long time. I didn’t know there were so many other women affected and that it went so deep. It was very shocking. But the fact that we [took action] together made it really healing,” Salma further explained. Noting that she has since “moved on,” she said, “I lived with that for long enough and I detach myself from it now.”