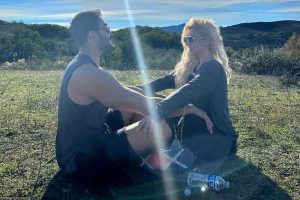 The 28-year-old model and budding actor responds to fan theories that he is controlling the ‘…Baby One More Time’ hitmaker’s life and social media account.

AceShowbiz –Sam Asghari has broken his silence on speculation that he controls his famous wife Britney Spears. The model flatly denied the rumors, joking that he doesn’t even have control over what they’re going to eat for dinner.

The 28-year-old hunk gave her take on the fan theories when met by TMZ while running errands in Los Angeles on Friday, December 30. While heading into his parked car, he was asked by a paparazzo if he’s “controlling Britney.”

“No,” Sam said to the camera, before jesting, “I don’t even control what we have for dinner.” Being a sweet and caring man he is, the budding actor even warned the videographer to be careful because there were cars passing behind him while taking the question.

Asked about the conspiracy theories that floated on social media in regard to Britney’s social media presence, with some fans believing that Sam is pulling the strings on her posts, the Iranian native said he understands where they are coming from.

“You know, in the past, there has been a lot of stuff going on, so I understand where [fans are] coming from,” he responded. He had nothing but praise for Britney’s fans as he added, “They’re just being protective. If anything, they’re being good fans.”

Sam previously has weighed in on Britney’s social media posts, particularly on her NSFW photos and videos that got her under fire. Defending his wife, he wrote in an Instagram comment earlier this month, “The only person in the world that gets bullied for posting things like this.”

He reposted his comment on his Story and added, “I personally preferred she never posted these but who am I to control someone that’s been under a microscope and been controlled for most of her life.”

Sam and Britney recently spent their Christmas Day with a relaxing hike and meditation. Sharing a picture and video from their quality time, he wrote in the caption, “A little hike & a little meditation on Christmas Day goes a long way my wife is really becoming a meditation guru and I love it Merry Britmas to you all from Samta & Britney.”