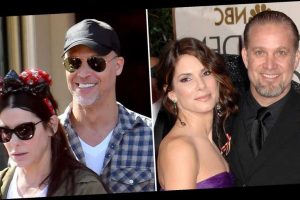 Leading lady on and off the screen! Sandra Bullock slays the love game in real life just as epically as she does in her charming romantic movies.

Bullock then elaborated on the qualities she wanted in a partner. “Who cares how much somebody makes for a living? In the end, we’re all going to be old and wrinkled,” she explained. “You’d like to know that that person can make you laugh and think, you know, can really stimulate you and excite you when they’re gone and you think about them. Somebody you can admire and be proud of and sit back and go, ‘This is my man.’ And whether or not he’s a millionaire or he’s a painter, a musician or somebody who just, you know, shucks clams, it’s that respect level that we forget to look for.”

The Oscar winner seemed to find her match in Jesse James, whom she wed in July 2005. However, they divorced in June 2010, three months after his cheating scandal.

“We’re all where we’re supposed to be,” she told Vogue in October 2013. “I am exactly where I want to be now. You can’t go backward. I’m not going backward. I’m grateful that I’m here, blessed to have what I have. Nobody can be prepared for anything.”

Bullock announced the adoptions of son Louis in April 2010 and daughter Laila in December 2015.

After becoming a mother, the Oscar winner moved on with Bryan Randall in 2015. “Bryan is such a sweet soul, and things couldn’t be more different from the toxic relationships she’s been in before,” a friend of Bullock exclusively told Us Weekly in June 2019, adding that she “knows Bryan is The One.”

Scroll down to revisit Bullock’s complete dating history, from marriage to long-term love and more.