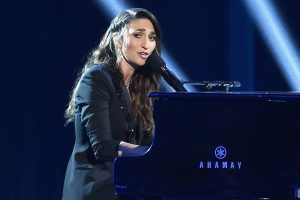 Sara Bareilles has announced that she will be releasing a new live concert album, Amidst the Chaos – Live from the Hollywood Bowl.

The concert was recorded live on November 2, 2019 during her show at the iconic Hollywood Bowl in Los Angeles. The live album will feature 21 songs, including three tracks from her Broadway musical Waitress and collaborations with Emily King and The Milk Carton Kids.

Sara of course performed her hit songs like “Brave,” “Love Song,” and “Gravity” during the show and the encore song was her Grammy-winning track “Saint Honesty.”

“The Hollywood Bowl has been a dream of mine since I was probably 18 years old. I knew I would never want to forget it. So we made a record. I never could have known that the shows on this tour would be the last ones I would play for a very long time so I am so proud to remember what it feels like to be together in music, and in sacred spaces like @hollywoodbowl. Preorder now for an instant download of the opening of the show,” Sara wrote on Instagram.

The album will be released on May 21 and you can pre-order it now on iTunes. Watch the trailer below!