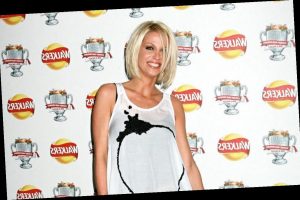 The Girls Aloud member recalls bursting into tears as she realized she might never be able to be pregnant due to the treatment she had following cancer diagnosis.

AceShowbiz –Sarah Harding wishes she’d had the opportunity to become a mother.

The Girls Aloud star is battling terminal breast cancer – which has spread to other parts of her body including her spine – and admitted the treatment she’s gone through to fight the disease “will have killed any chance” she may have had of becoming a mum.

Recalling a conversation with bandmate Cheryl in her book “Hear Me Out“, Sarah wrote, “I was saying how we never thought Nadine (Coyle) would be the first one of us to have a child, and that now three of them have kids.”

“It might seem odd to worry about not having children when I don’t even know how much of a life I have left, but it’s there.”

“The truth is, even if my prognosis was better, it still wouldn’t be on the cards because of all the chemotherapy I’ve had.”

“That treatment, harsh as it is, will have killed any chance I might have had. It’s making me cry just thinking about it.”

Of her former bandmates, Nadine has daughter Anaiya, seven, with Jason Bell, Cheryl is mother to three-year-old son Bear with ex-boyfriend Liam Payne, while Kimberley Walsh – who is expecting her third child – has sons Bobby, six, and four-year-old Cole with husband Justin Scott.

Meanwhile, Sarah, 39, has also opened up about regrets, and she admitted her 2011 split from ex-fiance Tom Crane was “one of the biggest mistakes” she ever made.

The former couple had a long-distance relationship during the peak of their respective careers and she has always held herself responsible.

She added, “I’ve never stopped blaming myself. Losing him was one of the biggest mistakes of my life, but we just couldn’t seem to find a way through the impasse.”

Sarah recently revealed Christmas 2020 could be her last because the spreading of her cancer now means the illness is terminal.

She said, “In December my doctor told me that the upcoming Christmas would probably be my last. I don’t want an exact prognosis. I don’t know why anyone would want that. Comfort and being as pain-free as possible is what’s important to me now.

“I’m trying to live and enjoy every second of my life, however long it might be. I am having a glass of wine or two during all this, because it helps me relax. I’m sure some people might think that’s not a great idea, but I want to try to enjoy myself.”

“I’m at a stage now where I don’t know how many months I have left. Who knows, maybe I’ll surprise everyone, but that’s how I’m looking at things.”