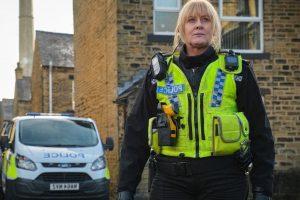 Happy Valley's Sarah Lancashire is well-known for appearing as Raquel Wolstenhulme in Coronation Street – but the star also played another character in the ITV soap.

After two award-winning seasons, Happy Valley returned this month for a final series on BBC One, with many people hailing Sarah as an acting powerhouse.

While working as a drama tutor at Salford University in 1987, Sarah, now 58, appeared in one episode of Corrie as Wendy Farmer, a prospective lodger of series regular Jack Duckworth, played by the late Bill Tarmey. In 1991, she returned to the cobbles as Raquel Wolstenhulme, who worked at the supermarket with Kevin Kennedy’s Curly Watts.

Her character married Curly and had one child with him, Alice, but soon ran away to France, where she married wine grower Armand de Beaux. Raquel returned to the show for a two-episode stint in 2000 and was nominated for several awards for her work on the soap.

Since appearing in Coronation Street, Sarah has also starred in other British shows such as Doctor Who, alongside David Tennant and Catherine Tate, Where the Heart Is, Skins and Last Tango in Halifax.

Fans have been completely enthralled by Sarah’s star turn in Happy Valley, with many taking to social media to gush over her acting chops.

One person wrote: “Nobody can deliver a line like Sarah Lancashire can.”

“I don’t think you understand how much i NEED a sarah lancashire oscar vehicle within the next 2 years, make her the next Olivia Coleman,” another said. A third added: “Someone once said to me that when you cone out of a really good film, you want to walk like the main character walks. I definitely want to walk like Sarah Lancashire in full cop uniform when she's off to bollock a games teacher.”

“Just trying to describe to my sister why she should watch Happy Valley and she's asked if it's too dark. I've said yes parts of it are dark but it's okay because you feel like Sarah Lancashire will protect you,” another fan declared.