Savannah Chrisley: Where I Stand With Ex-Fiance Nic Kerdiles 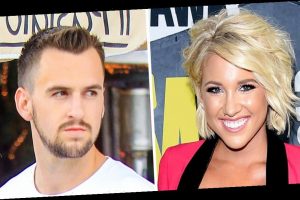 Everything happens for a reason. Savannah Chrisley is “doing great” after calling off her engagement to Nic Kerdiles earlier this year — but she isn’t quite ready to move on just yet.

“Nic and I, we’re on good terms,” the Chrisley Knows Best star, 23, told Us Weekly exclusively on Monday, November 9, while discussing her Sassy by Savannah cosmetics line. “We’re both so young and ambitious, and you know, we’re trying to find our way in life. … No decision is ever permanent, so you never know what can happen. We have the rest of our lives to figure things out.”

The reality TV personality and Kerdiles, 26, got engaged in April 2019 after two years of dating. Nearly one year later, Chrisley revealed that the duo had pressed pause on planning their wedding.

“We made [the decision] together,” she explained on the “Chrisley Confessions” podcast in June. “We both realized that things moved way too fast and we needed to go back to dating.”

Three months later, the Georgia native announced via Instagram that she and the hockey player had officially called it quits.

“There’s no hatred between the two of us … and in all honesty … that makes saying goodbye even harder. We have nothing but love, respect, and admiration for one another but it’s time for us to move forward individually,” she wrote at the time. “These past 3 years have been some of the best years of my life … but I have to trust that God has a far greater purpose for my life … I believe that He will take this hardship and make something beautiful out of it. Now please be kind with this news that I am sharing.”

Kerdiles, for his part, noted that he was “truly blessed” to have grown alongside his former flame. “I still look at her as the type of woman I want to spend the rest of my life with. She is everything one could want in a mother, daughter, wife and friend,” he wrote via Instagram in September.

As they continue to navigate their lives apart from each other, Chrisley told Us that she and Kerdiles are “taking time to focus on ourselves.” Despite their breakup, the duo will always have a special bond.

“We do talk, we are the best of friends. There is no bad will toward each other or any fighting, none of that, which is great,” Chrisley explained. “We’re just kind of like, ‘Whatever’s going to happen is going to happen.’ There’s no pressure on anything.”

Both Chrisley and the Texas native are channeling their energy into bettering themselves as individuals and each “want to be successful in [their] careers.” Though she’s in a good headspace after her split, the Growing Up Chrisley star isn’t ready to jump back in the dating pool.

END_OF_DOCUMENT_TOKEN_TO_BE_REPLACED

END_OF_DOCUMENT_TOKEN_TO_BE_REPLACED
We and our partners use cookies on this site to improve our service, perform analytics, personalize advertising, measure advertising performance, and remember website preferences.Ok