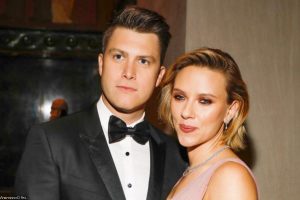 The expecting ‘Avengers: Endgame’ actress, who sparked pregnancy rumors in June after skipping out on several ‘Black Widow’ events, is unveiled to be ‘due soon.’

AceShowbiz –Scarlett Johansson is allegedly having a bun in the oven. Having hidden her pregnancy for months, the “Avengers: Endgame” actress is reportedly “thrilled” to be expecting her first child with her comedian husband Colin Jost.

The 36-year-old expectant mom first sparked pregnancy rumors in June. On the reason why, an insider claimed, “She hasn’t been doing many interviews or events to promote ‘Black Widow‘ which is surprising since it is a huge Marvel/Disney release and she is both the star and an executive producer.”

Scarlett, who has been promoting “Black Widow” via Zoom, was also said to be absent from its screening in the Hamptons on July 2 despite having a house there. An insider explained, “Scarlett usually spends a lot of the summer out in Amagansett and Montauk, and you’d often see her walking her dogs on the beach or getting coffee. But this summer it seems like she is deliberately trying to keep a low profile.”

Scarlett and Colin tied the knot in October 2020 in a private ceremony in New York. They were first linked romantically in 2017 after they were spotted cozying up to one another at an after-party following her hosting gig on “Saturday Night Live“. The pair got engaged in 2019.

The baby will be Colin’s first and Scarlett’s second child. She is already a mother to six-year-old daughter Rose, whom she shares with her former husband Romain Dauriac. The former couple was married from 2014 to 2016. Prior to that, the “Lucy” star was married to Ryan Reynolds for two years before parting ways in 2010.