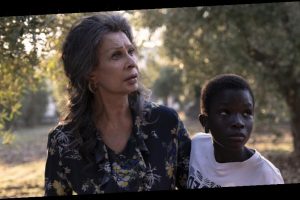 Sophia Loren is back on the big screen with Netflix‘s upcoming feature, The Life Ahead.

The 86-year-old Oscar winning actress stars as Rosa in the drama film.

Here’s the official summary: In the colorful Italian port city of Bari, the streetwise 12-year-old Senegalese orphan Momo (Ibrahima Gueye) has ambitions to make his fortune in the underworld of the town’s shady alleyways.

One day, he steals a bag of items from the elderly Madame Rosa (Loren), a Holocaust survivor who makes a meagre living raising the children of prostitutes with whom she once shared the streets.

When Momo is forced to apologize to Rosa, she reluctantly agrees to take him in temporarily and the two lonely individuals find an unlikely family in each other through a deep and unconventional bond.

“The Life Ahead”, directed by Sophia‘s son, Edoardo Ponti, will make its debut on Netflix on November 13.

The film is also being planned for a November theatrical release.

END_OF_DOCUMENT_TOKEN_TO_BE_REPLACED

END_OF_DOCUMENT_TOKEN_TO_BE_REPLACED
We and our partners use cookies on this site to improve our service, perform analytics, personalize advertising, measure advertising performance, and remember website preferences.Ok