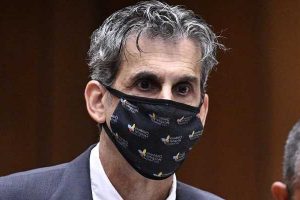 According to Judge Virginia Wilson, who called the disgraced TV producer a ‘serial rapist,’ he needs to be in custody as he is dangerous and a threat to society.

AceShowbiz -“Scrubs” writer Eric Weinberg’s bail has been revoked in his sexual assault trial. The 63-year-old television producer has been remanded into custody and will remain in jail as he awaits his next court appearance next month, after denying 18 counts of sexual assault and previously being out on a $5 million bail.

According to the Los Angeles District Attorney’s office, Eric “pleaded not guilty and was remanded into custody and being held without bail. He is scheduled to return to court on November 15 for a preliminary hearing setting.”

Deputy District Attorney Marlene Martinez explained to the court that prosecutors believe Eric “is a danger to society”. She added, “He approached any young female and uses his status as a writer-producer to manipulate these women.”

Eric’s legal representatives advocated for their client to remain free but have restrictions put on his freedom, such as house arrest. However, according to The Hollywood Reporter, the presiding judge Virginia Wilson ruled that “the defendant has engaged in a pattern of violence towards women for over six years.”

Eric was arrested at his home in Los Feliz in July and stands accused of rape and sexual assaults. According to the Los Angeles Police Department, Eric is alleged to have “targeted women in grocery stores, coffee shops, and other public places.”

They claim the TV executive “would approach the women who were in their 20-30s, under the guise of being a photographer and would set up photo shoots with them”. They added that “once the women were in his residence, he would sexually assault them during the photo shoot.”

Lawyer Micha Star Liberty, who is representing the victims, welcomed the decision, labeling it “satisfying”, She told the outlet, “Justice was served today. It’s very satisfying that the judge found enough factual allegations to declare Mr. Weinberg a serial rapist.”