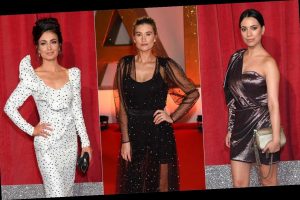 We've seen their engagement photos, shared in their excitement of wedding planning, and now we're taking a closer look at some of the Emmerdale stars' beautiful engagement rings. From the gorgeous gold band designed by Fiona Wade after her former co-star Simon Cotton's romantic proposal to the stunning halo ring worn by newly-engaged Hayley Tammadon, they're all gorgeous in their own way…

Long-time Emmerdale star Charley Webb married her co-star Matthew Wolfenden on 10 February 2018, more than nine years after he proposed. The mum-of-three wears two rose gold bands adorned with diamonds and a sapphire, which they designed themselves in India following the wedding, and gave fans a close-up look at the striking jewellery in honour of their second wedding anniversary. Isn't it gorgeous?!

Priya Sharma actress Fiona announced her engagement to boyfriend Simon Cotton in December 2018, after meeting on the set of Emmerdale. Although Simon initially presented his girlfriend with her mother's engagement ring, they have since been to design Fiona's dream ring together, which has a diamond set on a slim gold band.

Hayley Tammadon – who has starred in both Emmerdale and Coronation Street – announced her engagement to her boyfriend Adrian in May, just three weeks after she revealed they are expecting their first child together. Taking to Twitter to share a photo of her new jewellery, which appears to be a halo ring on a silver or platinum band, Hayley wrote: "HE PROPOSED ………….. I said YES!!!! This year is turning out to be quite wonderful."

GALLERY: 10 of the most expensive celebrity engagement rings

Lisa revealed in May 2018 that she was engaged to her boyfriend Al. The actress, who briefly returned to Emmerdale earlier this year, shared a peek at her engagement ring on Instagram, which is set on a silver band.

While she hasn't revealed if it is her engagement ring, Charlotte is often seen wearing this unique ring on her wedding finger. The actress confirmed in May 2015 that she had designed her own engagement ring ahead of her secret wedding to husband Mungo Denison, which took place in May 2012 with only the couple's children and mothers present.

Louisa, who plays Maya Stepney in the soap, married her husband Jeremy Brier in June 2011, with Judge Rinder as their best man. The actress wears a delicate gold ring on her left hand, which was seen when she made an appearance on Lorraine.

Emmerdale's Roxy Shahidi wears a stunning gold engagement ring presented to her by her husband Arsher Ali. The Leyla Harding actress appears to have designed her wedding ring to fit with the gold band following their wedding in 2010.