Home » Celebrities » Selena Gomez Through The Years: See Her Transformation From Disney Darling To Stunning Songstress

Selena Gomez Through The Years: See Her Transformation From Disney Darling To Stunning Songstress 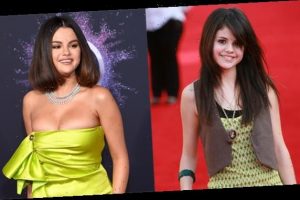 Fans have watched Selena Gomez mature from young Disney star on ‘Wizards Of Waverly Place’ to passionate ‘Rare.’ Now, we’re taking a look back at her remarkable transformation over the years!

Selena Gomez has been a mainstay of pop culture for well over a decade. When fans first met her, Selena was no more than a teenager, casting a magical spell on audiences on the Disney Channel original series Wizards Of Waverly Place. But since then, she’s gone on to accomplish so much. Now, we’re taking a look back to see her transformation from Disney darling to stunning songstress!

It all started in 2007 when Selena skyrocketed to fame playing Alex Russo on the Disney Channel series Wizards Of Waverly Place. Selena spent a number of years with Disney, contributing to their themed albums featuring Disney stars and making appearances on other Disney shows like The Suite Life on Deck and Hannah Montana. During her time at the House of Mouse, she also starred in a number of kid-friendly movies like Princess Protection Program, Ramona and Beezus, and two Wizards Of Waverly Place adjacent films.

By the time Wizards wrapped in 2012, Selena was ready for a change and to prove that she was a mature performer who could take on heavier work. That same year, she appeared in Harmony Korine‘s film Spring Breakers alongside James Franco and her fellow Disney Channel alum Vanessa Hudgens. Although she only appeared in the first half of the film, Selena wholly proved that she was capable of more intense acting.

While the rest of her career would see the starlet appear in films like The Fundamentals of Caring, Neighbors 2: Sorority Rising, and The Dead Don’t Die, it quickly became all about the music. Between 2013-2020, Selena has released three solo albums — 2013’s Stars Dance, 2015’s Revival, and her latest album Rare. Much of Selena’s inspiration for her music comes directly from her personal life.

From roughly December 2012 until March 2018, Selena was in a tumultuous on-again, off-again relationship with Justin Bieber, who went on to marry model Hailey Baldwin. In the time since the former couple called it quits once and for all, Selena has become more open about her relationship with Justin, with Rare acting as her most vulnerable work to date. The album featured songs like “Lose You To Love Me,” which never calls out Justin directly, but fans are certain is about the singer.

Selena has so many plans for the future, including her Rare Beauty line, acting projects, and more music to come. At 27, she’s grown so much and we cannot wait to see how she takes on the next chapter in her life. To see more images of Selena through the years, check out the gallery above!